Pentagon Confirmation of the Extraterrestrial Presence and Emanuel Swedenborg


After over 70 years of silence and public denial, the U.S. Department of Defense has finally released an official cockpit video of an F/A-18 Super Hornet trying to intercept a UFO off the coast of San Diego in 2004. It was released in August of this year, and it shows in the video a white oval object that does a strange rotation while it is being tailed by the F/A-18:

Here I think is the original video upload given to the New York Times:


Not only do we have the video, we have the testimony of the two Navy pilots who were trying to chase down the UFOs: Cmdr. David Fravor and Lt. Cmdr. Jim Slaight. One interview can be found here: 2 Navy Airmen and an Object That ‘Accelerated Like Nothing I’ve Ever Seen’.  It first appeared at 80,000 ft, then dropped to 20,000 ft. By the time the aircraft arrived the object was hovering 50 ft above sea level, causing a disturbance to the water below it. As they tried to intercept, it then shot away and disappeared. The two pilots were then told to meet at a rendezvous point 60 miles away, and a few moments later the object appeared at the exact rendezvous point before the fighter jets could arrive there. The object was playing games with them, perhaps in response to the Navy's military exercise to demonstrate their combat power to respond to "a national emergency or crisis" (see Seven Carrier Strike Groups Underway for Exercise). Apparently these UFOs started to play a "cat and mouse" game with the U.S. Navy over a period of 2 weeks.

The video was released by the "Advanced Aerospace Threat Identification" program, which supposedly began in 2007 and supposedly shutdown in 2012 - see Glowing Auras and ‘Black Money’: The Pentagon’s Mysterious U.F.O. Program. Parts of it still remain classified, but the most interesting tidbit is this sentence:


The funding went to Mr. Bigelow’s company, Bigelow Aerospace, which hired subcontractors and solicited research for the program.
Under Mr. Bigelow’s direction, the company modified buildings in Las Vegas for the storage of metal alloys and other materials that Mr. Elizondo and program contractors said had been recovered from unidentified aerial phenomena.
And behind that sentence that I highlighted in bold there is a lot more. The truth of the matter is that the U.S. military started tracking these UFOs since the 1950s. The U.S. military first became aware of these UFOs during WWII as they started to tail our pilots during their bombing runs over Germany, and were called "Foo Fighters." Public interest was at an all-time high until the U.S. Air Force terminated Project Blue Book in 1969. So this event is not exactly new. What is new is that the U.S. Department of Defense has apparently decided to follow a track of a "slow information release" to the public. This incident was first reported by a group of "former spies and spooks" who decided to go public about it - see I-Team: Public company launched to investigate UFOs.

So this particular incident is important - we have a verified video from the U.S. Department of Defense plus the witness testimony of 2 pilots. There are many false videos and photographs on the internet, and these are part of another arm of an intelligence agency that puts out false information on this subject as part of a massive counter intelligence program.


SO WHO ARE THEY AND WHY ARE THEY HERE?

The increase in activity of these UFOs is in response to several events:

There are three main theories as to their origin, and all may be true:
Their modus operandi is as follows:

WHAT WAS THE FIRST REPORTED EXTRATERRESTRIAL ENCOUNTER?


Interestingly, the first reported extraterrestrial encounter was experienced through visionary states by Emanuel Swedenborg in the 18th century. The clairvoyant abilities of Emanuel Swedenborg have been well documented, and one incident was investigated by the German philosopher Immanuel Kant. Similar to modern encounters, Swedenborg stated that most tend to communicate in a non-verbal manner:

"They are averse to vocal speech, because it is material, and therefore, when no intermediate spirits were present, I could not speak with them except by a kind of active thought." (Earths in the Universe, n. 17)

This is obviously a barrier to contact. However the U.S. Military has recognized this, and there are reports they have employed empaths to enable communication.

Swedenborg even described one group that was interstellar, who were interested in increasing their knowledge of the universe:

"The spirits of that earth go in companies and troops, and when assembled together, they form as it were a globe. ...That they wander through the universe to acquire knowledges of things, was evident to me also from this — that once when they appeared very remote from me, they spoke with me thence, and said that they were then gathered together, and were going out of the sphere of this world into the starry heaven" (Earths in the Universe, n. 25).

In his visionary state he saw that these extraterrestrials were associated with the planets of our solar system, and even though he could not see the planets themselves Swedenborg falsely concluded that the planets of the solar system were inhabited. Given this, many discount entirely the testimony of Swedenborg as to his spiritual and theological topics. Those within the New Church have their own theories that generally discount what Swedenborg had to say on the topic as well. One contrary indication to these negative theories is that Swedenborg was able to accurately describe the rings of Saturn, long before their nature was confirmed by science.

In Swedenborg's account Earths in the Universe many do not consider that these extraterrestrials were highly advanced, either in orbit around such planets or dwelling in temporary underground bases. One factor that is generally not considered is that of biological contamination, which is another barrier for contact. Thus if they needed to setup a temporary base of operation for observation, a dead planet with no biological agents would be more ideal then that of earth itself, which has an extreme variety of biological life, a rarity in our galaxy.

So the barriers of contact are many, and the entire subject requires discernment and education, but most of all, a willingness to break the social taboo on this subject. But hopefully some of the evidence presented here as to their existence will remove the barrier to anyone wishing to explore the spiritual revelations given to Emanuel Swedenborg, for they have been ignored for far too long. 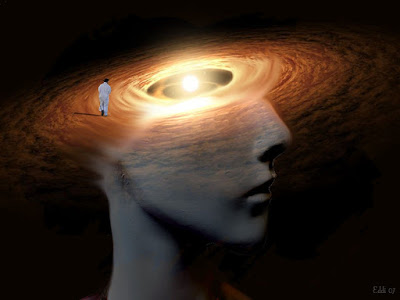