A Clairvoyant Dream of the Venus Rose and Revelation 22:16-17 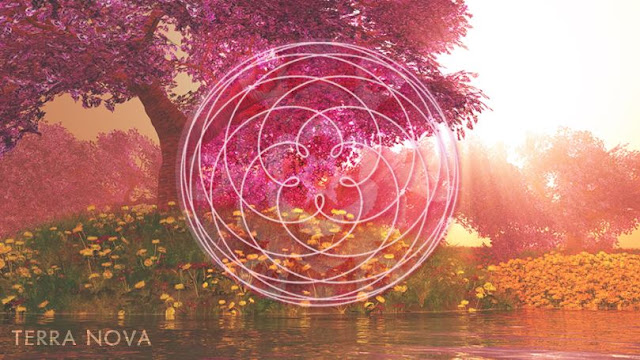 Last night I had a dream which turned out to be "clairvoyant" - that is, it provided knowledge that I did not know about before.  The beginning and ending were vague, but the central portion of the dream I remember as it was repeated to me several times.

In the dream, it would seem that I was a new recruit to some Islamic religious organization. I go to some private place, perhaps a warehouse, and I come to realize that the religious organization is a mere front for an Islamist terrorist group. They want to carry out some terrorist attack, and I realize I would have two choices: either I would need to be trained to use a gun and shoot other people, or I would need to be trained to blow up bombs. At this point it is not clear if this meant that I should be a so-called "martyr" in a suicide bombing. I immediately realize I am in the wrong place, I need to get out of this organization. It was very clear this was murder, and against God's will.

I then decide to make my escape and get out of this radical religious group. It was complicated: I could not publicly turn against them, but if they did an attack, I would surely be implicated in the blame for it. For some reason, I have to wait until I come to a gas station. I approach the gas pump, and next to the gas pumps there is a small bookshelf or double stand.  On it, I see two Bibles, one with a brown cover, another with a white cover.  I pick up the one with the white cover, and there was some red symbol on it. In the dream, it was conveyed to me that this was the "Rosata" Bible. I open the Bible and read Revelation 22:16-17, and then close it.

At this point in the dream, there is a woman, or woman's voice, off to my right. She asks me, what passage did I read? I said it was Revelation 22:16-17. I think I asked her why she wanted to know. She repeats it again, what passage did I read?  I reply again, it was Revelation 22:16-17. This repeats, I don't know how many times, but it seems that the dream wanted me to remember the passage of Revelation 22:16-17.  And in the dream, I have no idea what the contents of the passage was, I only remember the reference, as it was repeated. I think this woman thanked me, but I never saw who she was.

So I turn and go to the car, and for some reason I take the white Bible with me. I then wonder if I chose the right Bible, I did not have time to compare the translations of the two. I then wonder what in the world does the word "Rosata" mean. The thought came it might be a Catholic translation, in which case it might have been the wrong one. Then I realize, why am I wasting my time with the Bible? I am at a gas station, and I have to concentrate on my escape, and I have very little time.

I drive away from the gas station, and at this point I make my escape. As I go down the road, I remember encountering several cars, which either tried to track me down or block me. Each time I was not sure if the cars belonged to the Islamist terrorist group, or to the authorities. I had to be very quick. At this time the dream fades, but the impression I had is I made my escape.


THE WORD "ROSATA" AS ROSETTA STONE

To interpret the dream, I first looked up the word "Rosata." The closest thing I could find was the Rosetta Stone, a trilingual stone discovered in Egypt: 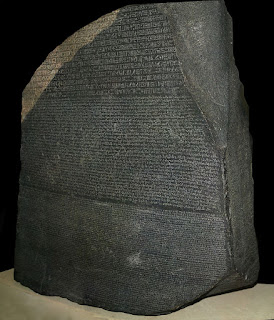 It was discovered in Egypt in 1798 by French forces under Napoleon. It was eventually realized it was trilingual containing a duplicate message written in Egyptian hieroglyphics, the Egyptian demotic script, and finally ancient Greek. It was finally cracked by Jean-François Champollion in Paris in 1822, and this eventually allowed Egyptologists to read ancient Egyptian hieroglyphs, which had been lost to the modern world. If "Rosata" conveyed this meaning, then it could refer the revelation of ancient knowledge hidden in the Bible, something that was done by Swedenborg also in the 18th century with his massive work Heavenly Arcana (aka Arcana Coelestia).  The Bible was written in a symbolic manner, where each word carried several levels of meaning: the literal, the spiritual and the celestial. According to Swedenborg, in the same manner Egyptian hieroglyphs were once used to convey sacred spiritual knowledge, which later became perverted into magic:


"That by the Egyptians are signified knowledges opposed to the truths of the church, is because the representatives and significatives of the Ancient Church, which church had also been with them, were there turned into magic; for by the representatives and significatives of the church of that time there was communication with heaven. This communication was with those who lived in the good of charity, and was opened with many; while with those who did not live in the good of charity, but in its opposites, open communication was sometimes given with evil spirits, who perverted all the truths of the church, and with them destroyed its goods, whence came magic. This may likewise be manifest from the hieroglyphics of the Egyptians, which they also used in sacred things, for by them they signified spiritual things, and perverted Divine order." (Heavenly Arcana, n. 6692)

The Egyptian hieroglyphs themselves were also once sacred:


"As to Pharaoh's saying that he did not know Jehovah, the case is this: the Egyptians from ancient time knew Jehovah, because even in Egypt there had been the Ancient Church — as may be manifestly evident from this, that they had among them the representatives and significatives of that church. The hieroglyphics of the Egyptians are nothing else; for by these were signified things spiritual, and they knew also that they actually corresponded" (Heavenly Arcana, n. 7097)


THE WORD "ROSATA" AS A ROSE 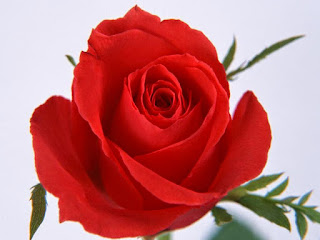 Dreams can have multiple meanings, in the dream I had the impression that the word "Rosata" was spelled or pronounced as "Rosata." The word rosata is Italian for the work "pink." This may be correct, as I was thinking that the Rosata Bible in the dream was a Catholic translation (I do not know Italian). I had also associated it with a symbol that was pink or red. The other impression that I had is it simply meant a red rose, for the Rosata symbol on the white Bible seemed to be a symbol of a flower. And indeed, the word for "rose" in Italian is rosa. That this is correct can be determined from the city name of Rosetta in Egypt where the Rosetta stone was discovered. Here is the name meaning, from wikipedia:


"Both the Arabic name Rašīd (meaning "guide") and the western name Rosetta or Rosette ("little rose" in Italian and French respectively) are corruptions of a Coptic toponym, Trashit. Rosetta or Rosette was the name used by the French at the time of Napoleon Bonaparte's campaign in Egypt and thus became eponymous of the Rosetta Stone..."

I had no idea the word Rosetta means "little rose" until I decided to look that up for this blog.  So why a white Bible with a rose symbol on it? According to Swedenborg, the colors white and red are the primary colors of heaven: 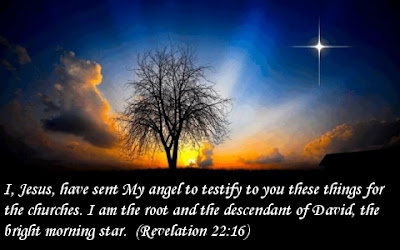 Clear in my mind, repeated over several times from the dream, was the reference to Revelation 22:16-17. So today, I looked it up, it says this:

The interesting reference here is the "root and the offspring of David, the bright and morning star." Here is the spiritual meaning of that passage:

That is the spiritual meaning of that passage. However the phrase "bright and morning star" in the literal sense specifically refers to the planet Venus, which is known as the morning and evening star. Venus was commonly known as the "morning star" as it appeared as the brightest star in the east right before sunrise. It is thus a symbol of the herald of the Lord's coming, signified by sunrise.

So, what does this, if anything, have to do with the rest of the dream?  At first nothing. However, I then discovered that in ancient mythology, the symbol for Venus was the rose. From Wikipedia:


"Venus' signs were for the most part the same as Aphrodite's. They include roses, which were offered in Venus' Porta Collina rites, and above all, myrtle (Latin murtos), which was cultivated for its white, sweetly scented flowers, aromatic, evergreen leaves and its various medical-magical properties. ...As goddess of love and sex, Venus played an essential role at Roman prenuptial rites and wedding nights, so myrtle and roses were used in bridal bouquets."

Again, note the ancient rites of Venus includes roses for the color red, and myrtle flowers for the color white, the two primary colors of heaven for love and truth which is the origin of marriage love between a man and a woman. And interestingly the passage of Revelation 22:16-17 mentions the bride, a symbol of the church. 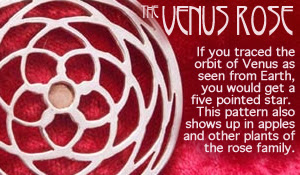 This indicates there was some ancient symbolism hidden in some of these ancient pagan rites, which Swedenborg states originated from a very ancient system of knowledge that predated Judaism and goes all the way back to ancient Egypt. Here is the pattern of the Venus Rose as it appeared in 1799 in an astronomy book by James Ferguson: 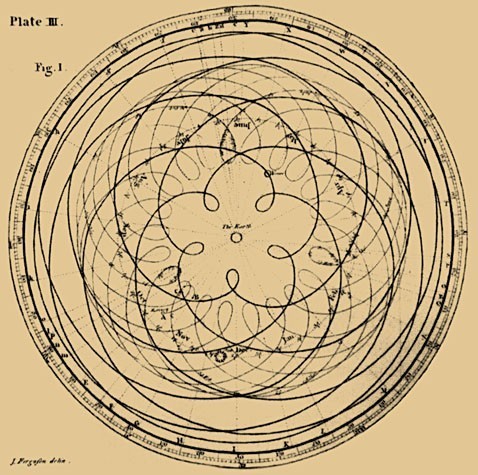 The evidence indicates that this is a clairvoyant dream of Revelation 22:16-17, where the passage is symbolically portrayed by symbols in the dream. The reference to the Rosetta Stone would signify a key to lost ancient knowledge, and the the colors of white and red signify love and truth, the basis of heaven and the doctrines of the New Church. For me to belong to an Islamist terrorist organization, and for me seeking to escape it, would signify a desire to leave a false religion and to find the truth. In this part of the dream, I may have stood in the place of another person who was in a similar situation. The rose is used as a symbol in certain mystical Sufi schools of Islam, where the rose is a symbol of one's quest for Divine love. Two prominent books aligned with Sufism are The Rose Garden by Saadi and Mahmud Shabistari's The Rose Garden of Secrets. The Sufi master Jilani is known as "the Rose of Baghdad" and his order, the Qadiriyya, uses the rose as its symbol.