The True Spiritual Faith of the New Church 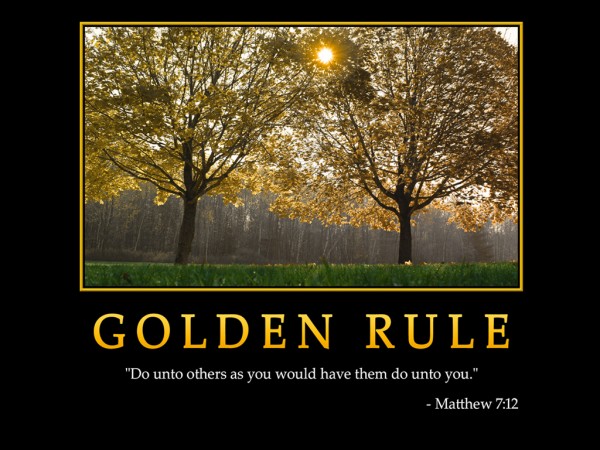 Whereas many religions emphasize just faith or belief, the central doctrine of the New Church is the Golden Rule.  The true church is not just people who believe the same thing, but rather it the church is made of any person who lives in love and charity.  The more a church is based on love, the closer it is to God and His truth.  In the present times most people emphasize "faith" -- and by faith most people assume it is mere belief of the memory.  But believing something is true, or a mere belief of knowledges in the memory, is not enough for a true spiritual life:


"...knowing is not believing, and that believing is internal; and that it cannot be given except in affection for good and truth, and accordingly to none but those who are in the good of charity toward the neighbor." (Heavenly Arcana, n. 4319.2)

In other words, there can be no spirituality apart from love, for all spiritual life and truth originate from love.  And yet learning or knowledge is necessary as an introduction to spiritual life, for without learning, or a desire to know, the way cannot be opened to higher spiritual truths:


"The external man receives its life principally from the internal man, that is, from its spirit or soul. Thence is its very life in general; but this life cannot be received in its particulars, or distinctly, by the external man, unless its organic vessels are opened, which are to be the recipients of the particulars and the singulars of the internal man. These organic vessels, which are to be the recipients, are not opened except by means of the senses, especially those of hearing and sight; and as they are opened, the internal man can flow in with its particulars and singulars. They are opened by means of the senses, by learning and knowledges, as also by pleasures and enjoyments; those belonging to the understanding by learning and knowledges, and those belonging to the will by pleasures and enjoyments." (Heavenly Arcana, n. 1563)

As an introduction to internal spiritual truths can only happen via external knowledges, derived from the senses and learning, invariably in the process of spiritual development one recognizes the falsehoods and opposing desires one has adopted the more one learns about spiritual truths.  When one reaches this stage, a "spiritual crisis" then develops, and one enters a period of temptation and struggles to remove these former falsehoods and evils:


"From these things it may be evident, that it must necessarily happen that learning and knowledges which cannot agree with spiritual truths, then insinuate themselves into the external man; and that pleasures and enjoyments insinuate themselves which cannot agree with celestial good things; as is the case with all those things which regard corporeal, worldly, and earthly things as ends; which, when regarded as ends, draw the external man outward and downward, and so remove it from the internal. Wherefore, unless such things are first dispersed, the internal man can by no means agree with the external; therefore before the internal man can agree with the external, such things must first be removed." (Heavenly Arcana, n. 1563.2)

Removal of these things is effected by temptation and repentance.  But most do not suffer to go through temptation and repentance, they are satisfied in the mere knowledge of spiritual matters.  But mere knowledge, without entering one's life in how one lives, effects nothing.  It is how one lives which determines one's eternal life, not what one knows.  Knowledge only serves as an introduction, and those who remain stuck in researching things of knowledge and remain there, without examining their life, are very much deceived.  Those who equate faith with just belief are even more deceived, for they make it a matter of persuasion in their religion and ignore things that relate to life and charity.

Although there are many sources of spiritual truth, many are not prepared to distinguish between truth and falsehood in spiritual matters, so it is best to start by learning spiritual knowledge from scripture.  Jesus, as a boy, began this way as a means of becoming united with his Father:


"The external man is corporeal and sensual; nor does it receive anything celestial and spiritual unless knowledges are implanted in it, as in ground; celestial things can have in these their receiving vessels, but the knowledges must be from the Word. Knowledges from the Word are such that they are open from the Lord Himself; for the Word is itself from the Lord through heaven, and the Lord's life is in every single thing of the Word, although it does not so appear in the external form. Hence it may be evident that the Lord in boyhood was not willing to imbue Himself with any other knowledges than those of the Word; and this was open to Him, as was said, from Jehovah Himself, His Father, with Whom He was to be united and become one; and this the more, because nothing is said in the Word which does not in its inmosts look to Him, and which did not first come from Him; for the Human Essence was only an additament to His Divine Essence which was from eternity." (Heavenly Arcana, n. 1461)

In teaching after teaching, the revelations of the New Church shows that love is primary, and faith or truth is secondary.  Yet many churches, especially the Protestant, make faith primary and charity or love of no account, or something that must be done for sake of civil morality.  But the truth is all truth leads to love, and any truth that does not becomes dissipated and forgotten, for the mind will only accept a truth or falsehood that fits how that person habitually lives. Those who are wise find the highest spirituality in living a moral life, not for sake of appearance, not for self honor, or fear of the law, but for the sake of love towards the Lord.

In the revelations of the New Church, it is shown how the entire Word is in fact based on the Golden Rule.  The Golden Rule can be divided into three spiritual levels of development:


1. Love towards the Lord, or the Divine Love.
2. Love towards the neighbour, or charity according to the good in others.
3. Learning and obedience from scripture, otherwise known as "the Law and the Prophets"

These are three levels of spiritual development, from highest to lowest - it is mentioned in many different ways throughout scripture, to see one of them see The Three Steps of Spiritual Development.  This begins to show in what way scripture is completely based on the Golden Rule. Although I have described the three levels from highest to lowest, one begins by going from lowest to highest.  Thus learning through knowledge of scripture, and obedience to it, is level 3 - the law and the prophets.  In the literal sense the law refers to the Torah, and the prophets to the second division of the Jewish canon.  But in the spiritual sense here the law relates to knowledge of how one should life, and the prophets refer to the truths of doctrine.  Once one learns these things, one begins to apply them - and this is done through love or charity to the neighbour, the second level.

This is the true faith of the New Church, and the New Church belongs to all those who are in this good according to this truth, and who acknowledge that this Divine Love manifested itself among us in human form in Jesus Christ.
Posted by Doug Webber at 1:50 PM