The Suffering of Palestinians under Apartheid Israel, and Armageddon

On Sunday I just happened to encounter a march in Clifton New Jersey supporting Palestinians and trying to make the public aware of the discriminatory policies of apartheid Zionist Israel. I could not believe it, just happened to stop there for lunch, found a place to park as the road was closed off, rounded the corner and the marchers were coming towards us. Here is a picture I took, one sign states "Authentic Rabbis always opposed Zionism and the State of Israel" and another is "State of Israel does not represent world Jewry": 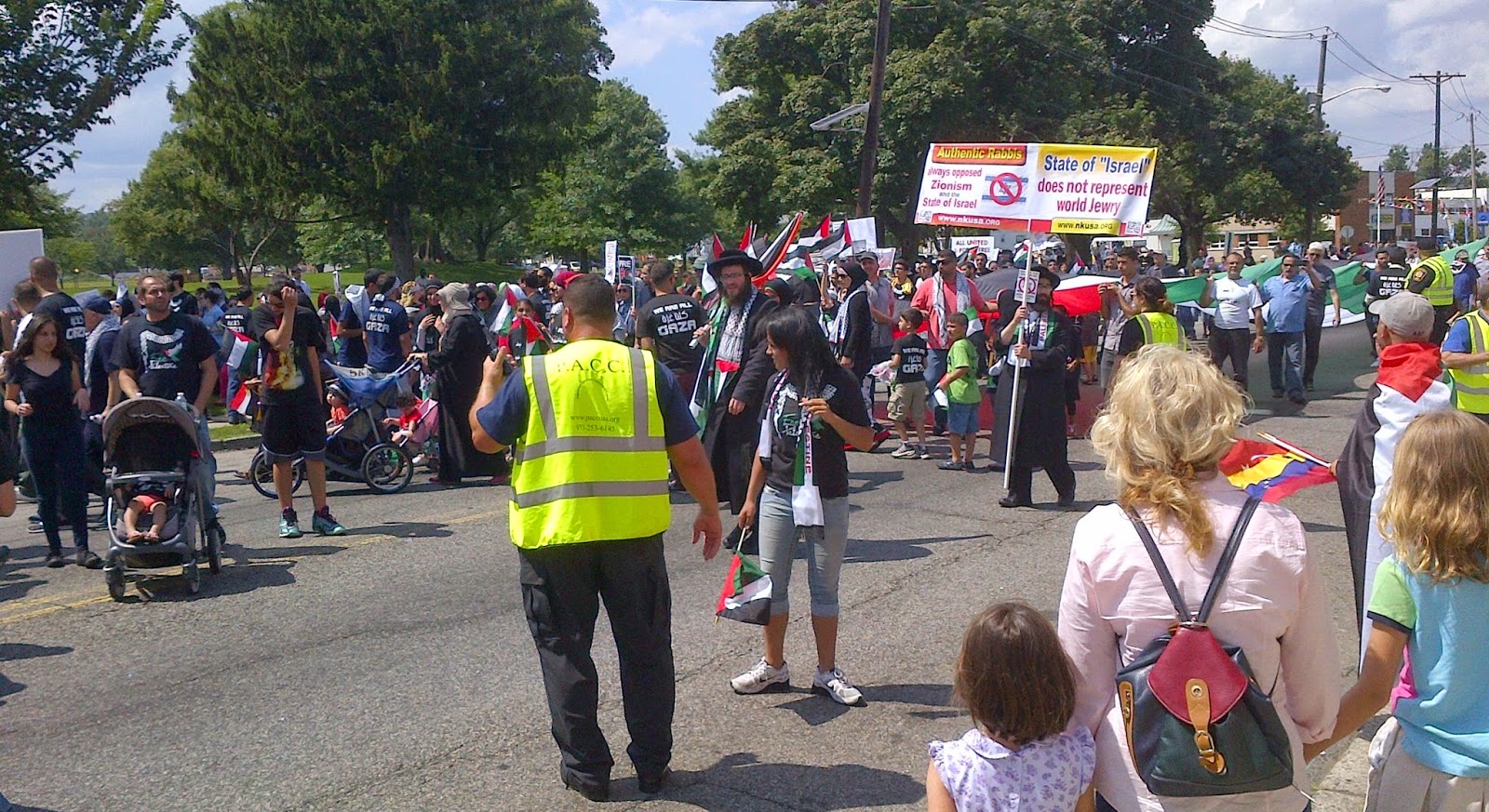 This could hardly be a coincidence. I had earlier posted Letter to Obama from Gaza by a Norwegian Doctor which details the suffering of the Palestinians in the hospital. The American public have been brainwashed into thinking Israel is "defending its borders" - when actually they are ignoring the borders agreed upon in 1967 - and that Israel is fighting against "terrorists" - when in fact their own military is practicing terrorism on the entire civilian population with U.S. made weapons. Palestinians are subject to arbitrary arrest, can have their home and land taken from them at any time, do not possess the same rights for education and work, and can basically be killed with impunity. Gaza strip is like a large concentration camp. Their own government has been subverted by the Israelis, and they are collectively punished. There is very little difference between what Israel is doing to the Palestinians and what Hitler did with the Jews of Europe - they both follow a philosophy based on racism. In the meantime, Christian ministers are utterly ignorant of what is happening - see Ignorance of Christian Ministers on Prophecies of Zionist Israel.

Jews and Muslims lived together in peace for centuries. That changed when Jewish terrorist organization began executing native Palestinians in 1947 to cause a mass exodus - and many still live in exile. As I was about to cross the street, I was interviewed by a reporter Minjae Park for The Record, where I explained to him some history behind this, and my own experiences while I was in Israel. He had asked what I thought of the march and I had replied, "I am against what is happening." He thought I meant I was against the march but I corrected him, and explained how I was against what Israel was doing to the Palestinians. When I was in Israel one Israeli freely admitted what they were doing, and justified it by saying "But you did the same to the native American Indians."

You can see Minjae Park's story from The Record here: Demonstrators in Passaic County call for an end to hate in Middle East. One Clifton resident was upset about the march as it had closed off the street for about a couple of hours and they were spending U.S. tax dollars. Apparently he is unaware that $3 billion U.S. dollars of taxpayer money goes to Israel each year, and U.S. made weapons are used to attack civilians in Gaza. From The United States is Not Just a Bystander in Israel-Gaza Violence, here is a picture of a U.S. made hellfire missile linked to the killing of a child and three medics in Gaza: 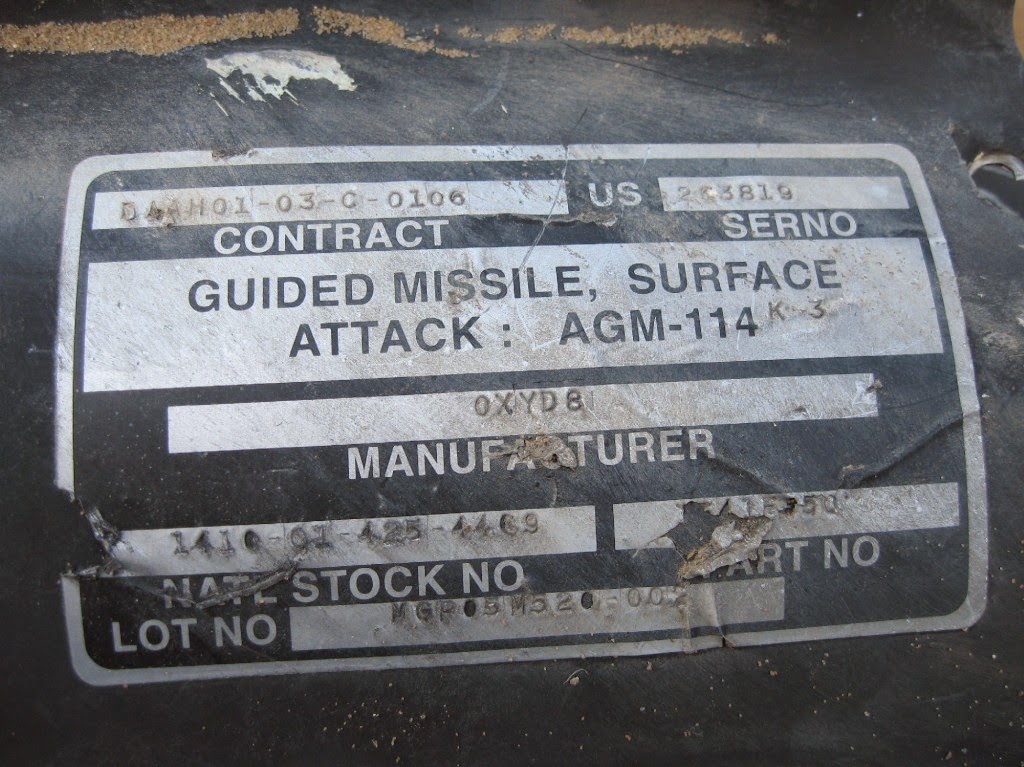 So, should we be concerned about tax payer dollars used to close off a street for 2 hours for people to express their freedom of speech, or is anyone concerned about the U.S. taxpayer dollars that are used to give Israel weapons to kill innocent civilians? If there is one militant in a group of civilians, does Israel have the right to kill the civilians as well as the militant? No.

As I walked across the street. Some Jewish protesters were protesting against Zionist Israel: 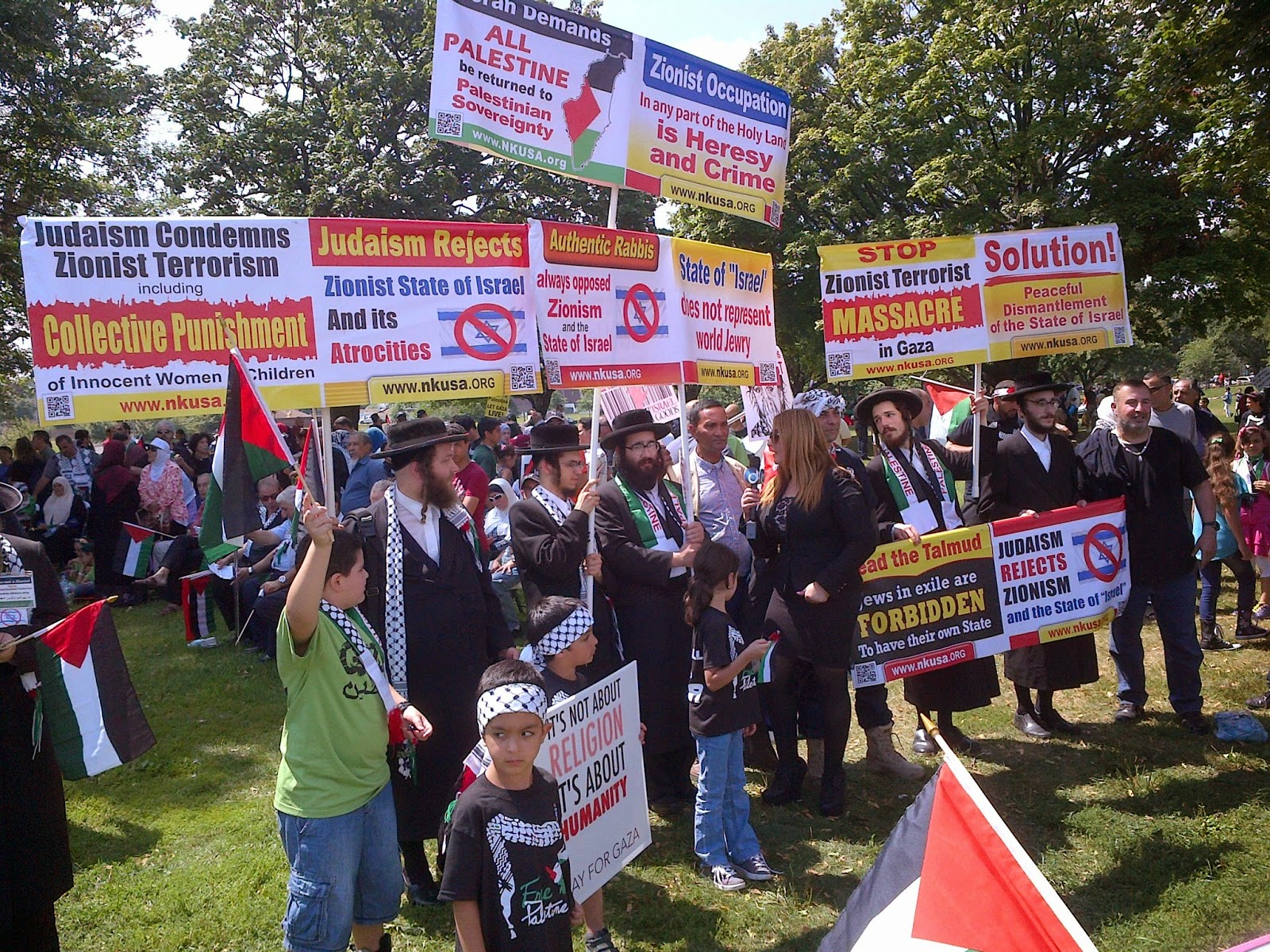 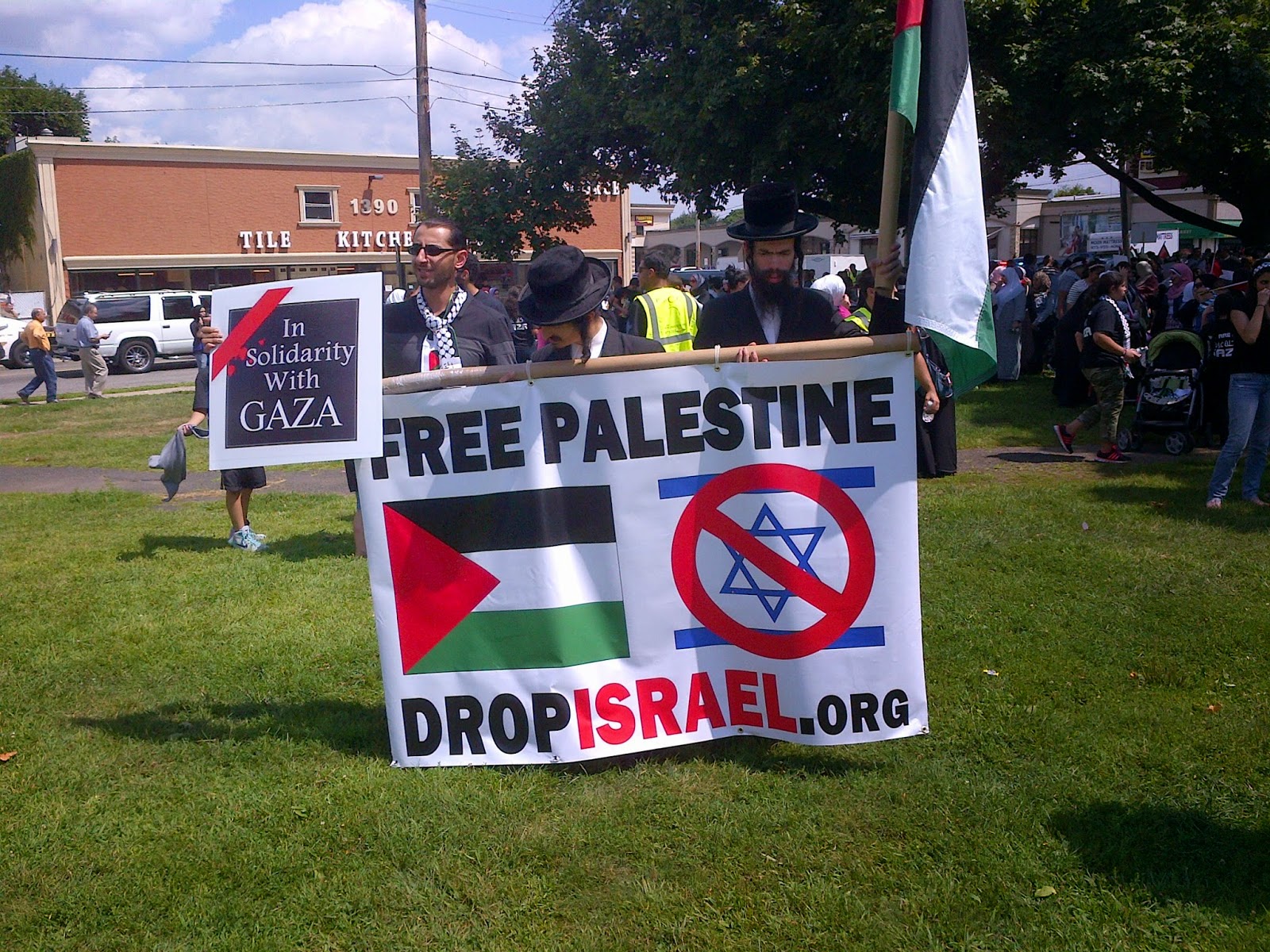 The web sites are here: Judaism Rejects the State of Israel and Jews United against Zionism.

Solution here is to restrict the delivery of weapons to Israel, and spend more money to help the civilians in Palestine who are now living in abject poverty.  Israel will not listen to the U.S. or the U.N. as long as they freely obtain $3 billion U.S. taxpayer money each year. If Zionist Israel did not practice racism, there would be no need for two states.

I helped the marchers hold out a Palestinian flag in the park: 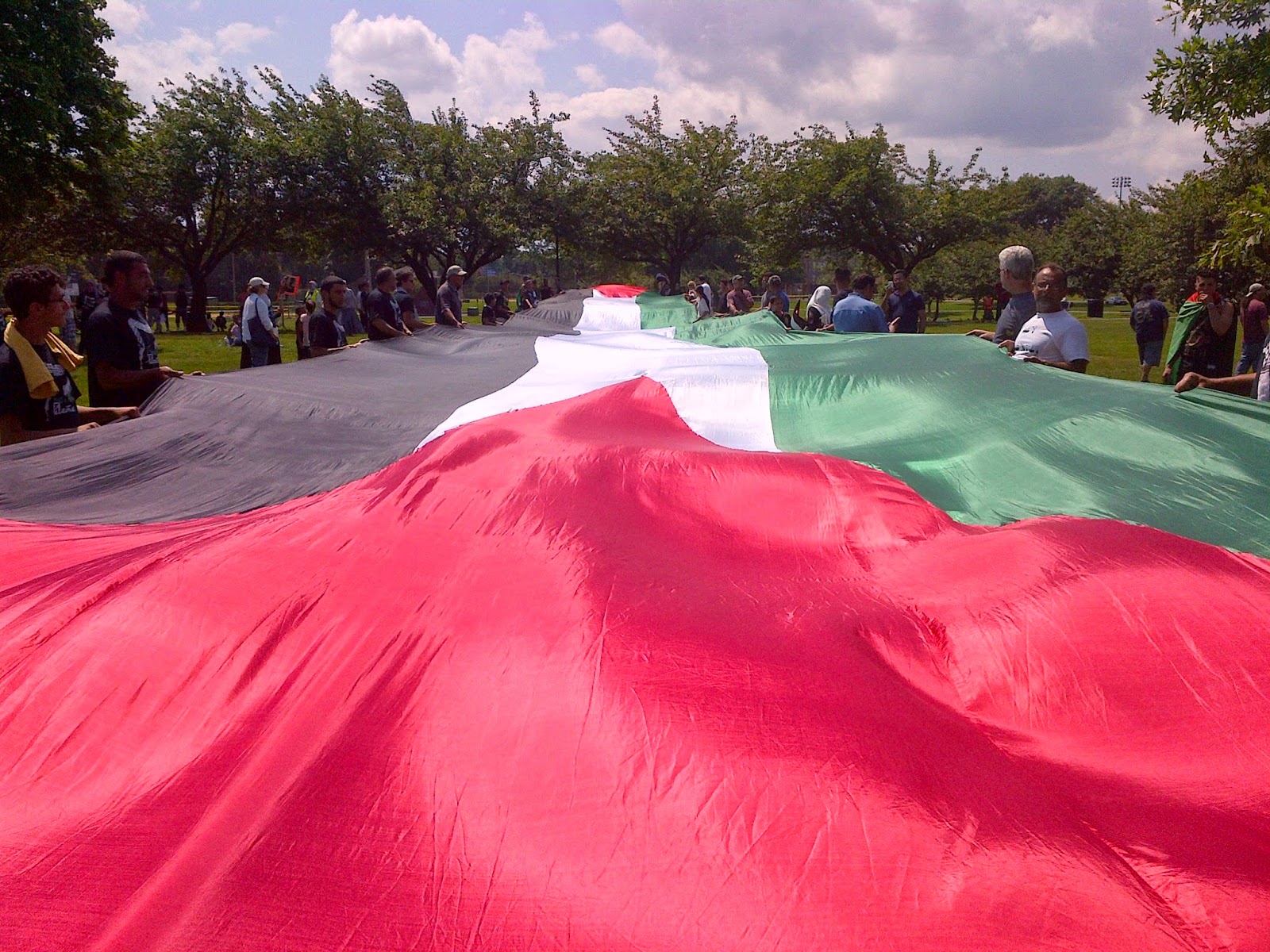 As I was holding the flag, I met a couple of Palestinians. One of them was a a Palestinian-American professor at a college, who was there in Gaza on vacation visiting family when the war broke out. He was trapped in the Gaza strip, and he had to escape using contacts at the American U.S. Embassy. He travelled to Jordan, then to Egypt, and had just arrived back the day before. He confirmed how the Israeli IDF is targetting civilians. The only safe away to get around in Gaza strip is by ambulance or U.N. marked vehicles, but the IDF is targeting those vehicles anyway. A friend of his, along with his brother, were killed while he was there - he had just stepped out of U.N. marked vehicle when IDF forces hit it, killing both him and his brother.

There is a disturbing pattern emerging here - IDF seems to be targeting civilians on purpose. The evidence for this is incontrovertible - the IDF had bombed a beach killing children that were playing there in front of a hotel of journalists, and they had hit two U.N. schools twice that had been marked as safe shelters. There were reports of them hitting school shelters before that, but these incidents are hard to deny. Then the professor mentioned something else that took me by surprise - that certain Jewish Rabbis in Israel are actually recommending that Israelis should kill Palestinian civilians. This took me by surprise. I mentioned this elsewhere and a Jewish lawyer accused me of "blood libel." So is this a fact, or is it libel? It actually happens to be true: certain Jewish Rabbis in Israel are making evil use of religion to justify the killing of innocent civilians. I found this report from Israeli rabbi says killing civilians in Gaza is allowed:

An Israeli rabbi has issued a ruling that allows the killing of innocent civilians in the besieged Gaza Strip.Dov Lior, an Israeli rabbi from the illegal settlement of Kiryat Arba in the occupied West Bank, said in the ruling that it is “okay” to kill innocent civilians and destroy Gaza.
The ruling also says that it is not necessary to check if the people targeted are civilians or non-civilians.
The rabbi’s ruling authorizes all means of targeting the people, such as “denying supplies or electricity.” He further says military forces are allowed “to bomb the whole area according to the discretion of the army...”
“In the case of Gaza,” the rabbi said, the Israeli military officials “will be allowed to instruct even the destruction of Gaza.”
He also said that, as the Israeli army is at war with the people in the blockaded enclave, “any kind of talk about humanism and consideration are moot.”

A DREAM AND A PROPHECY CONCERNING THE PALESTINIANS

A friend of mine had a clairvoyant dream, and saw many children and men wounded in a hospital. One of the men turned and asked, "Why are you not helping us?"  I had meant to put this up on the blog earlier but had been delayed.


The sixth angel poured out his bowl on the great river Euphrates, and its water was dried up, to prepare the way for the kings from the east.
And I saw, coming out of the mouth of the dragon and out of the mouth of the beast and out of the mouth of the false prophet, three unclean spirits like frogs.
For they are demonic spirits, performing signs, who go abroad to the kings of the whole world, to assemble them for battle on the great day of God the Almighty.
(“Behold, I am coming like a thief! Blessed is the one who stays awake, keeping his garments on, that he may not go about naked and be seen exposed!”)
And they assembled them at the place that in Hebrew is called Armageddon. (Rev. 16:12-16)

In the visions of Emanuel Swedenborg, which he spelled our in Apocalypse Revealed and Apocalypse Explained, the dragon, the beast and the false prophet is a symbolic reference to the false Protestant doctrine of justification by faith alone - which in current times makes Christianity one of belief only with the mouth, not of life. Armageddon in a spiritual sense refers to a spiritual battle between this old church of a trinity of three beings with the New Church, which follows God in one person Jesus Christ. But there is a literal fulfillment to this as well. I had pointed out that it was the U.S. which falsely invaded Iraq, and Turkey has built a dam which has the potential to dry up the river Euphrates. Moreover, Armageddon means hill of Megiddo, and is an actual place in Israel near the border with the West Bank. And guess what? There was actually a battle at Megiddo in 1918 in which the British drove the Ottoman Empire out of the Middle East and took control over Palestine: 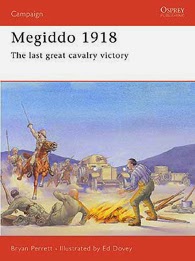 After holding at Romani in August 1916, British troops began advancing across the Sinai Peninsula. Winning minor victories at Magdhaba and Rafa, their campaign was finally halted in front of Gaza by Ottoman forces in March 1917. After a second attempt against the city failed, command of the Egyptian Expeditionary Force passed to General Sir Edmund Allenby. Renewing the Allied offensive in late October, Allenby shattered the enemy defenses at the Third Battle of Gaza. Rapidly advancing, he entered Jerusalem in December. Though Allenby intended to crush the Ottomans in the spring of 1918, he was quickly forced on the defensive when the bulk of his troops were reassigned to aid in defeating the German Spring Offensives on the Western Front. Holding along a line running from the Mediterranean east to the Jordan River, Allenby was slowly reinforced during the summer.

Working in conjunction with Arab forces, Allenby's troops won several minor actions as they closed on Damascus. The city fell to the Arabs on October 1. Along the coast, British forces captured Beirut seven days later. Meeting light to no resistance, Allenby directed his units north and Aleppo fell to the 5th Mounted Division and the Arabs on October 25. With their forces in complete disarray, the Ottomans made peace on October 30 when they signed the Armistice of Mudros.
The Battle of Megiddo was a key victory for the British. It allowed them to follow up on the Balfour Declaration of 1917, which helped lead to the current Zionist state of Israel.  The inhumane suffering of the Palestinians is what is causing the rise of terrorism in the Middle East, but the U.S. does nothing as it has been supporting Israel with financial aid and veto power at the U.N. AIPAC is constantly lobbying the U.S. government to give one sided support to Israel. Make a difference: write to your senators and congressmen.
Posted by Doug Webber at 12:42 PM