Nostradamus and the Year 1999

This blog is actually from an old web site of mine, posted in 1999. It is an important prophecy as Nostradamus identifies America as the "great king of terror" who descends from the sky with it superior air-power. Not only that, since then researchers have pointed to evidence that the military knew of the planes that were going to crash into the World Trade Center on September 11, 2001. The article shows that Nostradamus foresaw the time period in which America would use "terrorism" in such a way to expand its power in a way never seen before. (Update: fixed broken graphic links 11/7/12).


Nostradamus, Who Was He?

Michael Nostradamus was a doctor, astrologer and prophet who lived from 1503 to 1566. He came from a Jewish family which had converted to Catholicism before he was born. As a doctor he fought against outbreaks of the plague in southern France. Between the years 1555 and 1558 he published almost a total of a thousand prophetic quatrains, divided into groups of a hundred, each group called a "Century." The quatrains are written in an obscure style in French, Latin and Greek. He became famous for predicting the death of King Henry II of France who died in a jousting tournament in 1559, and advised Queen Catherine de Medici on several occasions. It can be historically documented that he predicted the timing of the death of the young King Francis II, and knew long in advance that Henry of Navarre would become king of France, who founded the Bourbon dynasty which would last over 200 years. As the years have passed many of his prophecies have been fulfilled, and he became well known for those that predicted the French Revolution, Napoleon, and World War II. In the future, America will decline in power and a world leader, the Antichrist, will arise in the east and invade the countries of Europe.
I am writing a book on Nostradamus, which has taken many years of research, but as world events have rapidly unfolded I decided to quickly publish some of this research on the internet. I intend to deal with past fulfillments and future prophecies of Nostradamus in more detail in my book. In the future I may put up a video clip from a movie on Nostradamus that I appeared in on CBS, called Mysteries of the Ancient World. What follows are selections from the writings of Nostradamus, and my interpretations of them.


Nostradamus and the year 1999


The year 1999, seventh month
From the sky will come a great King of terror
To bring back to life the great king of Angoumois
Before and after, Mars to reign by good luck.

The first line of this quatrain refers to the seventh month, thus many believe that Nostradamus is refering to the month of July. However when this quatrain was written the old Julian calendar was in use, and we now use the modern Gregorian calendar which was implemented in the year 1582 A.D. The date that Nostradamus is refering to is August 11, 1999 on our calendar, which is July 29, 1999 on the old Julian calendar. On August 11 a great solar eclipse will take place, passing over Europe, the Middle East, Iran, Pakistan and India. The path of the solar eclipse is shown in the map (courtesy of Fred Espenak's Eclipse Home Page) below. 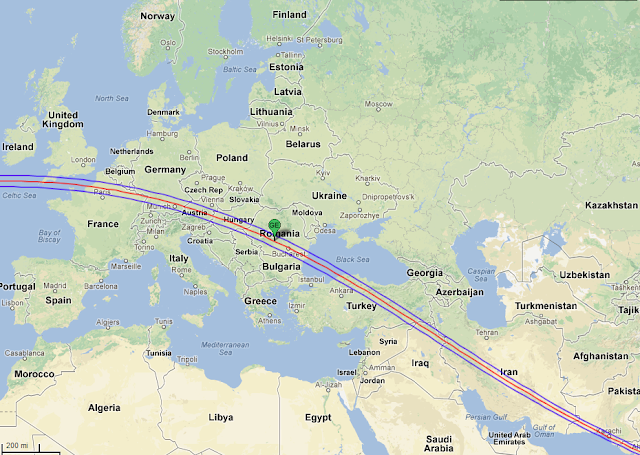 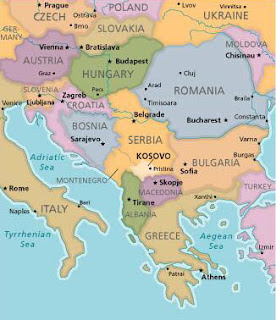 Nostradamus made use of solar eclipses in other quatrains to date other events that have been fulfilled, and to pinpoint the geographic region. The event would either take place near the path of the eclipse, or near the central longitude of an eclipse path. I do not intend to discuss these past fulfillments here. In fact, solar eclipses have been noted by astronomers and astrologers throughout the ages, and this involves a whole separate area of study. Two total solar eclipses worth mentioning is one that took place on November 29, 29 A.D. which was visible in Palestine and marked the baptism of Christ and the beginning of his ministry. Another took place on March 19, 33 A.D. which preceded the crucifixion of Christ. This was not visible in Palestine, but the central longitude of the eclipse path was to the east, passing through modern Saudi Arabia and Iraq. For other solar eclipses, see Solar Eclipses of Historical Interest

Nostradamus states, From the sky will come a great King of terror, to bring back to life the great king of Angoumois. In March of 1999 NATO forces led by America started a bombing campaign against Yugoslavia, which prompted Milosevic and his military to terrorize Kosovo and force the citizens to leave their country into the neighboring states of Albania, Macedonia, and the province of Montenegro. The bombing is opposed by Russia, a long-time ally to the Serbs in Yugoslavia. State propaganda in Yugoslavia and Russia is stating that the refugee situation in Kosovo is due to the NATO bombings, when in fact the military forces under Milosevic are forcing the Kosovo Albanians to leave their country, except for the males. As women, children, and old people leave the province their identities are being systematically removed. Serb military forces had wiped out the male population in Bosnia - Herzegovina, and indications are that Milosevic is doing the same in Kosovo, not unlike what Hitler did to the Jews in World War II.
Angoumois is a historic province in west central France, north-east of Bordeaux (see map of France above.) The capital is Angoulême. King Francis I of France (1515-1547 A.D.) was Count of Angoulême before he became king, and founded the Valois dynasty which ruled over France until 1589 A.D. Therefore some have interpreted this quatrain as predicting the coming of a future king of France. These lines would then describe a soul descending from heaven at the time of birth, giving life to a newborn child causing him to breathe. The word translated as bring back to life can be more literally translated as resuscitate. However, Francis I was not exactly a king of terror, thus the majority of English commentators have mistranslated the word for Angoumois as Mongols. The great king of terror would then be Ghengis Khan, a great Mongolian leader of the 13th century. The word in the actual text is Angolmois, thus this prophecy does not refer to the Mongols or to the revival of Ghengis Khan. This has led to many misinterpretations of this quatrain. Nostradamus talks about China and Mongolia in other quatrains concerning the future, but that's another story.

If we look further back into the history of Angoumois, the province was settled by the Visigoths in 418 A.D., one of the many groups of the barbarians that brought about the collapse of the Roman Empire. The Visigoths had defeated the Romans at the battle of Adrianople in 378 A.D., and then were settled in Thrace by the Roman Emperor Theodosius in 382 A.D. Under Alaric I, the Visigoths sought a new home and began a campaign of pillage through the Balkans (in the vicinity of modern Yugoslavia) and Greece. Alaric was then named "master of the military of Illyrium." Illyrium is on the east coast of the Adriatic Sea. In 401 A.D. he began a campaign against Italy, and although he was first beaten back in northern Italy he eventually led the Visigoths to the conquest and pillage of Rome in 410 A.D. However Alaric I was killed in southern Italy. His successors then led the Visigoths to eventually settle in western France and Spain.
Nostradamus is not referring to the revival of the Valois dynasty in France or Ghengis Khan of the Mongols - he is talking about the revival of the king of the Visigoths, Alaric I. The Visigoths had no permanent homeland until they had settled in western France, thus Nostradamus is using that location to refer to them. Alaric I was a king of terror. Nostradamus often makes use of past historical events to describe future prophetic events. Slobodan Milosevic, president of Yugoslavia, is our modern day Alaric. Like Alaric, he is seeking new homelands for his people, and like Alaric, Milosevic is conducting a campaign of pillage and war in the Balkans. Although he has created many refugees by forcing the Kosovo Albanians to leave their territory, there are still many Serbian refugees in Serbia from the previous war in Bosnia - Herzegovina. Currently, the bombing of Yugoslavia has consolidated Milosevic's power in his own country. Like Alaric, Milosevic's war is currently against military forces based in Italy. The last line of the quatrain states, Before and after, Mars to reign by good luck. Mars is the god of war, and Nostradamus knew in advance that there would be a war before and after August 11, 1999.

For the movie, Mysteries of the Ancient World, which aired on CBS just when the war in Bosnia - Herzegovina was under way, I presented some of this information to the movie producers as they were interested in quatrain X-72, since it included a specific date. However in order to present this quatrain, the path of the eclipse, and to describe how it is related to the war in Yugoslavia would have taken too much time. At that time I expected the war in Bosnia-Herzegovina to continue up to the year 1999. Instead that one ended, and a new one has taken place in Kosovo.
Posted by Doug Webber at 5:35 AM