A Prophecy of September 11 and Iraq 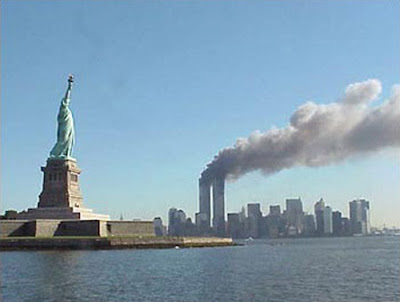 Nostradamus is one of my favorite topics - I have a collection of interpretations on just about all of his prophecies. I hope to publish a book on it one day, but looking at how busy my schedule is these days, it looks like it is close to impossible.

There are a number of quatrains that concern the attack of September 11, 2001, and the war on Iraq. I am of the opinion that our government was complicit in allowing the attack of September 11 to happen, in order to go to war for oil. War games were scheduled to ensure that the hijacked planes would not get intercepted. This is why Cheney has kept his "energy task force" meetings private - basically he met with oil companies to discuss oil resources in Iraq. Cheney and Bush deserve to be impeached for what they have done. So far, the media has been successful in blinding the mass majority.

Anyway, all major events in history since 1556 was foreseen by Nostradamus, and this is no exception. Here are two quatrains to consider closely:


Earth-shaking fire from the center of the earthWill cause the tower of the new city to tremble:Two great rocks will make war for a long timeThen Arethusa will redden a new river. (I-87)

Arethusa was a nymph of Elis in Greece who was chased by the river god Alpheus, and was changed by Artemis into a stream which ran under the sea until its waters rose again in the island of Ortygia, near Syracuse. However, according to the classical writer Apollodorus Arethusa was one of the nymphs called the Atlantides or Hesperides, who guarded the golden apples. The blessed isles of Hesperides were located by some to the West beyond the Atlas mountains. Hesperides is a term used throughout the quatrains to refer to America, thus the new city is a reference to New York. The French spelling for Arethusa is Arethuse, but here the Latin spelling is used. The word Arethusa contains the initials USA. The word for "earth-shaking" is an epithet for Neptune, god of the sea, used throughout the quatrains to refer to a sea power – in this case America.


This prophecy was fulfilled with the attack on the World Trade Center on September 11, 2001. Two planes slammed into the twin towers of the World Trade Center, causing them to collapse and creating a minor earthquake in New York City. Thus it was in fact an "earth-shaking fire." It came from the "center of the earth," that is, the World Trade Center. The "two great rocks" are the two twin towers. The attacks came from the Al-Qaeda organization which had close associations with the Taliban in Afghanistan. Following this America launched an attack on Afghanistan. "Arethusa" happens to also be the name of a river in Syria, near the border of Iraq - showing America will use this as an excuse to redden the rivers of Iraq with blood.

A villainous, wicked, infamous one will enter
Tyrannizing Mesopotamia:
All friends made by the adulterous lady,Land horrible, black of physiognomy. (VIII-70)

Mesopotomia is the classical name for modern Iraq, and means "the land between two rivers". The villainous wicked tyrant that enters the country is America, during the two Gulf Wars. I take that back - the first Gulf War in fact never ended. This would cover the period from 1991 to present. The land made horrible and black of physiognomy refers to the oil fires of the first Gulf War, and the suicide bombings that have been occuring recently. The "adulterous lady" has three meanings: a lady is used by Nostradamus to refer to a Republic, referring to a system of government that did not have a king, for that was strange to him. Secondly, the adulterous lady refers to the symbol of the Statue of Liberty, which was a gift to our country from France. Thirdly, it refers to the system of adulterous alliances made to invade the country for oil.

Certainly, when the prophetic eye reveals the true character of the foreign policy of the United States it is not so gratifying, is it?
Posted by Doug Webber at 11:43 PM