The Seven Stages of Existence

Whereas science is objective, and the rules are known, religion is subjective and must be experienced. In the West, science and religion have diverged, when in fact they used to be one. Chemistry was derived from Alchemy. The laws of physics were discovered by Isaac Newton who was trying the determine the laws of God. Whereas science is based on factual observations, religion is based on revelation - dreams, visions and prophecy.
One amazing book I have read is The Reflexive Universe, by Arthur Young. It is a theory that combines science with religion. Earlier I wrote that the seven days of creation has nothing to with the creation of the universe. Well actually it does, somewhat, but not in the way we think. What Arthur Young discovered is that all of creation can be divided into seven phases of creation:

Each one builds on the other. As he examines each phase of creation, each phase of creation can be further divided into seven smaller stages of existence. There are seven categories of atoms, seven categories of molecules, seven of plants, etc. The seventh stage of each phase is where things get really interesting. For example, the seventh stage of molecules is the DNA double helix. Each stage is distinguished by "degrees of freedom". The less freedom there is, the more well known the laws are, and thus the more well known that stage of existence will be to science. Thus we have the following diagram of all of existence: 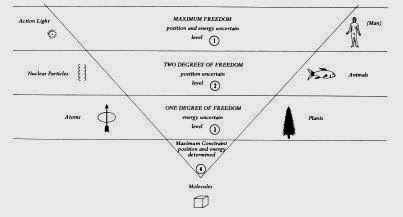 The "box" in the above diagram is the phase of molecules, the least amount of freedom, the most amount of rules, and thus the area of existence we know most about. When we get to humans, we get into psychology, the stuff we know the least about. We have to experience it in order to learn. What is interesting about the theory is that it presents consciousness as descending from light into the basest of matter, and then ascending back up into higher and higher life forms, until we "return to the Light" as it were. This reminds me of one of Rumi's poems:

I died from minerality and became vegetable;
And From vegetativeness I died and became animal.
I died from animality and became man.
Then why fear disappearance through death?
Next time I shall die
Bringing forth wings and feathers like angels;
After that, soaring higher than angels -
What you cannot imagine,
I shall be that.