Is there Salvation from Belief Alone? 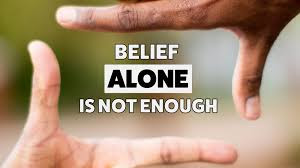 Many Christians, especially newly converted Christians, think that salvation comes by merely believing in Jesus Christ and being baptized.  And that's it.  It's a one time event, and then one is done: even worse, some think what you do in life is of no account. But is this true? Is this what scripture teaches? The answer is a definite no: for the word translated as "belief" is more accurately translated as "faith," and faith is not a mere belief in factual knowledge but rather, it is living by the truth, which is turning away from sin and in doing charity to others or being useful in life.

There are some verses that do in fact seem to teach the above teaching, but one has to also ignore a host of other scripture that teaches against belief alone. Jesus spoke very strongly against those who were in a religion of belief alone, or those who heard His words, and did not do them:

And it gets worse: Jesus said those who just say "Lord, Lord" and pray and yet live an evil life will be condemned (Matt. 7:22-23, 25:31-46).  You cannot just believe and live an evil life, without considering your sins. For all will be judged according to their works (Matt. 16:27, Rom. 2:6, Rev. 22:12). And we are talking here about the works of charity, or the effects of doing from good intent, and the work of turning against evil - NOT the external works of the Mosaic ritual law which is what Paul focused on in his letters to the early church.


WHAT PASSAGES OF SCRIPTURE SEEM TO CONFIRM BELIEF ALONE?

There are a few passages that seem to confirm that all one has to do is believe to be saved. So lets take a look at them. The first comes from Mark:


Whoever believes and is baptized will be saved, but whoever does not believe will be condemned. (Matt. 16:16)

So how do we reconcile this passage with what Jesus said earlier? The issue here is that this verse is not just mentioning baptism by water: baptism by water is merely an external ritual that in itself does nothing. What it is talking about is spiritual baptism: dying to your old self and beginning a new life, which is effected by repentance, or turning away from sin, and doing what God commanded. Baptism signifies a washing away by the truth, for it is from truth that we know that we should fight against sin and turn away from it. That we are not talking about mere water baptism, but a spiritual baptism, we know from the gospel of Mark itself:


I have baptized you with water, but he will baptize you with the Holy Spirit (Mark 1:8)

For when we turn away from sin, putting our trust in Jesus Christ, He fills our heart with the Holy Spirit. That Mark is talking about spiritual baptism, which is spiritual regeneration by turning away from evil, we know from this when James and John asked that they sit at his left and right hand in the kingdom:

Obviously Jesus is speaking figuratively. To drink the cup is to experience temptation, which we can see in Jesus' prayer at the Garden of Gethsemane:

To be baptized is to undergo spiritual regeneration by turning away from sin after having been tempted, through which we receive the Holy Spirit. This is done through Jesus who experienced the most severest of temptations from all of hell. And note that to sit with Jesus is not something Jesus can just give to those who want it: it is given to those who live a life of service and charity, which Jesus explains in the verses following (see Mark 10:41-45). So is salvation a "free gift"?  No, not according to Jesus. We have to undergo temptation ("drink the cup"), turn away from evil ("be baptized"), and live by His commandments in charity and usefulness (be a servant).

There are several other verses that mention "belief" as necessary for salvation or eternal life, all from the gospel of John: John 3:12,15-16,18,36; 6:40,47; 8:24, 11:25-26. The word "belief" here is not mere belief, the exact same word can be translated as "faith" which is to live by the truth: by repentance with utter focus on Jesus to work through us, and to do what He said. This is what "believing the Son" means, it is not mere factual knowledge of the memory. We know it is not mere belief, for Jesus Himself asks:

The word "faithful" comes from the same root word that is translated as "belief." The one that is faithful is the one who does according to what Jesus says, which is described in the parable that follows the question (see Luke 12:42-48). We also know that Jesus considered "belief", or more accurately "faith" - is to do God's will, from the parable of the two sons (see Matt. 21:28-32).

The one who believes, and yet does not put the words into practice in one's life, is compared to a plant that grows from seed in rocky soil quickly, but withers away when the hardship of temptation comes:


The ones on the rock are those who, when they hear the word, receive it with joy. But these have no root; they believe for a while, and in time of testing fall away. (Luke 8:13)

To have no root is to not apply the Word to one's life, that is being "rooted" in the Word. Whereas the ones who received the Word, and live by it, are the ones that grow and bear fruit (Luke 8:15).


"Knowing is not believing, and that believing is internal; and that it cannot be given except in affection for good and truth, and accordingly to none but those who are in the good of charity toward the neighbor." (Heavenly Arcana, 4319.2)

Email ThisBlogThis!Share to TwitterShare to FacebookShare to Pinterest
Labels: Justification by Faith Alone