In Remembrance of the War of Jehovah 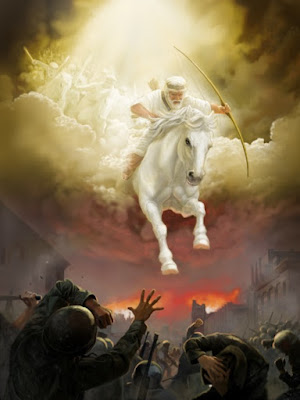 On Memorial Day we honor our war veterans who fought in battle.  But let us remember one battle or war that almost no one has seen, and very few understand, much less remember. It is the war that Jehovah fought against all the hells to save humanity.

The One God Jehovah descended and assumed human form for the purpose of redeeming humanity. The way this was done is he inherited a human body capable of being tempted from his human mother. But his soul was Divine and could not be tempted: thus in Jesus Christ, a battle arose between Jehovah and all of hell.

These temptations were a thousandfold if not greater than the ordinary temptations that humans undergo in their daily lives. They are described very briefly in the gospels when they mention how Jesus was tempted in the wilderness after having been baptized. They are described in more detail in the Psalms, and some of it becomes clear in the garden of Gethsemane when Jesus sweated blood. The Catholic mystic Emmerich described it as a constant psychological assault of evil spirits flooding the mind of Jesus with evil and perverse thoughts - and the way Emmerich describes it, an ordinary man would have gone insane.

Man, in this material world, lives in between the realm of heaven and hell, which are in constant equilibrium and this is the origin of our free will. Animals do not have this, and this is what makes man spiritual - a part of his or her soul is eternal and lives forever. But on this planet man had become so withdrawn in his ego and materialism, that heaven began to become cut off, and spiritual influx from heaven was threatened to be cut off. Divine influx not only leads us to what is good, but our very lives are dependent on this Divine influx. Swedenborg was told by angels that had not Jesus come, we would have reached a state where there would be no human alive on this planet.

So, it became necessary for Jehovah to descend in human form, and make his human Divine - a Divine Human. In this manner, the connection between God and man was restored in the God-Man: for once he made his human Divine, the Holy Spirit could flow from his body into all humanity. Not only this, but also heaven and hell were brought back into equilibrium with each other. This is mentioned briefly in the New Testament - as to how when Jesus died, many souls rose from the dead and appeared in the holy city, and that between the time he died and rose from the dead he preached to the souls caught in the middle region of Limbo between heaven and hell. Souls that had been held back there due to the prevailing power of hell were able to ascend with Jesus to heaven. This is described in symbolic form by the deliverance of the Israelites from the slavery of Egypt, and the Exodus by passing through the Red Sea. Thus Jesus was crucified on the Passover to indicate the fulfillment of this prophecy.

Some glimpses of the War of Jehovah against hell can be seen in the descriptions scattered throughout the writings of Emanuel Swedenborg, especially his work on The Last Judgment, as well as a brief vision by the Catholic visionary Catherine Anne Emmerich.

It is, unfortunately, a forgotten war. So let us remember on Memorial Day the forgotten hero that saved us all from certain death - death of not just the body, but the death of the soul. Did not Jesus give us the ritual of communion, and say "Do this in remembrance of Me?" For through Jesus Christ we can now have the opportunity of living in eternal happiness, by turning away from evil and doing what is good through the commandment of the golden rule.
Posted by Doug Webber at 9:45 PM