The Seven Practices of Peace 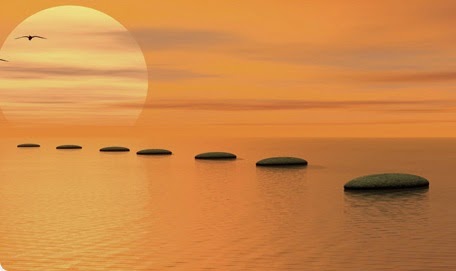 The Seven Practices of Peace is a book that describes the seven steps of spiritual development, described in a symbolic fashion by the seven days of creation in Genesis.  For literal fundamentalists, the book is misinterpreted as describing the creation of the earth in a literal seven days.  In the New Church, it has been revealed that it symbolically represented seven stages of spiritual development - where each "day" is a state of being, beginning with the lower states of preparation of cleaning and opening one's inner self, followed by successive states where the Divine begins to flow inside our soul.  For scripture is not talking about heaven and earth here, but rather a new creation of the soul (heaven) and the body (earth).

I had previously blogged about this in Seven Stages of Spiritual Development (or, the Seven Chakras).  These seven stages of spiritual development, I believe, describe the 7th level of order in the theory of Arthur M. Young as described in his book The Reflexive Universe.  I have been blogging about this theory, with some of my corrections, under the label of "Universal Order."  The first six orders describe external material realities, which divides creation into seven discrete degrees of order. The final 7th order describe internal spiritual realities, something that Arthur M. Young was unfamiliar with to complete his theory.  As each person advances through these spritual stages, inwardly their soul advances into another spiritual level. 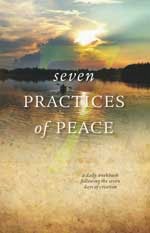 I picked up the book The Seven Practices of Peace today at a book expo in Bryn Athyn Pennsylvania, for it is written in a simple manner which can be used in a group discussion (see New Church Journey for more info). It allows one to take a theory and put it into practice. It is my opinion that the Swedenborgian or New Church needs to do more to get this spiritual information out there to ordinary people, and starting a group discussion in one's home is a good start.  Start with yourself, then your family, then others.

Most will probably think that these are seven steps of knowledge. But that is incorrect, and it is a fallacy to place all of one's spiritual development in knowledge or just receiving "enlightenment." A true spiritual path combines love with truth, or the will with one's thought. One begins with the truth, and the next step is to change one's will. While the book gives a seven week program, in reality it is a process that lasts one's entire life.  And it should be known that very few reach the higher stages of spiritual development. Swedenborg describes these stages as follows:

"The first state is that which precedes — both the state from infancy, and that immediately before regeneration — and this is called a void, emptiness, and darkness. And the first movement, which is the Lord's mercy, is the Spirit of God moving upon the faces of the waters.

The second state is when a distinction is made between the things which are the Lord's, and those that are man's own. Those that are the Lord's are called in the Word remains; and here are especially knowledges of faith, which have been learned from infancy. These are stored up, and not manifested until he comes into this state; which is a state rarely attained at this day without temptation, misfortune, and sorrow, that cause the things of the body and the world, and thus of man's own, to become quiescent, and as it were dead. The things that are of the external man are thus separated from those of the internal. In the internal are the remains, stored up by the Lord unto this time and for this use.

The third is a state of repentance; in which man from his internal talks piously and devoutly, and brings forth things that are good, as works of charity, but are yet inanimate, because he thinks they are from himself. And these are called tender herbage, then herb yielding seed, and afterward, the fruit-tree.

The fourth state is when man is affected with love, and enlightened by faith. He talked indeed piously before, and brought forth things that were good, but from a state of temptation and distress, not from faith and charity. For this reason faith and love are now enkindled in the internal man, and are called two lights.

The fifth state is when man talks from faith, and thereby confirms himself in truth and good. The things which he now produces are animate, and are called fishes of the sea, and fowl of the heavens.

The sixth state is when man speaks truths and does good works from faith and thence from love. The things that he now produces are called the living soul, and the beast. And as he now begins to act at once both from faith and from love, he becomes a spiritual man, who is called an image. His spiritual life is delighted and sustained by the things that are of knowledges of faith, and that are of works of charity, which are called his food, and his natural life is delighted and sustained by those that belong to the body and the senses; from which a conflict arises, until love reigns and he becomes a celestial man.

Those who are regenerated do not all attain this state. But some, and the greatest part at this day, only reach the first; some only the second; some the third, the fourth, the fifth, rarely the sixth; and scarcely any one the seventh." (Heavenly Arcana, n. 7-13)

Thus it can be seen that this is not seven steps of knowledge, it is seven steps of reforming the selfish ego, away from selfishness towards love.  This path is not tied to any particular religion, it is universal. Its just that many do not get these steps down correctly, and have been revealed in waking visions to Emanuel Swedenborg.

Those who are in ignorance are at "ground zero" where they are a formless void of self interest, absorbed in external material things.  The first step is when one begins to receive knowledge of what is good and truth. For without knowledge, there is no guidance. But knowledge is the lowest step, and is not the end of the journey.

The second stage is the hard one: after one acknowledges what is good and truth, one then self examines one self and begins to realize that one's desires and life is not according to what is good and truth.  This is a period of temptation and distress.  Those who overcome temptation, enter a period of repentance, this is stage 3.  But very, very few are willing to self examine themselves, fewer still take action and turn against their selfish desires:

"It is wonderful that one can find fault with another who is intending evil, and say, "Do not do that, because it is sin," and yet it is hard for him to say so to himself; this is because the latter moves the will, but the other only the thought nearest to the hearing. Inquiry was made in the spiritual world who could practise this second kind of repentance; and they were found as rare as doves in a vast desert; and some said that they could indeed do this, but that they were not able to examine themselves and confess their sins before God. But still, all they who do good from religion avoid actual evils; and yet how very rarely do they reflect upon the interiors, which are of the will, in the belief that they are not in evils because they are in good, yes, that the good covers the evil. But, my friend, the first of charity is to shun evils; the Word teaches this, the Decalogue, Baptism, the Holy Supper, and also reason; for how can any one flee from evils and banish them without some self-inspection? and how can good become good unless it has been inwardly purified? I know that all pious men, and also all who have sound reason will assent to this while they read it, and will see that it is genuine truth; but still that few will act accordingly." (True Christian Religion, n. 535)

True Christianity is to inwardly examine oneself and turn away from evil.  It is for this reason Christianity in its true form I consider better than so many "New Age" type of spirituality and meditation, for they only address knowledge or enlightenment, and they never address the problem of evil in the will, and how to cleanse it. It is easy to know, but much harder to do.

Here is a video of a sailboat of  Bernard Moitessier taking a long trip over water, which symbolizes the period of temptation. Appropriately done to the music of Every Day by Carly Comando.