Spiritual Ascension is from Truth towards Love 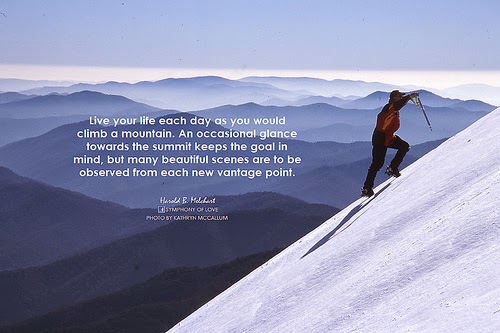 The steps or degrees of one's spiritual advancement occur in several stages:

These stages of spiritual development are universal, and are described in a variety of ways in a symbolic manner in scripture, one of them by successive births of a generation.  Swedenborg comments on this when describing the spiritual significance of Reuben, Simeon, Levi and Judah, the four sons of Leah by Jacob:

This also is the ascent which was signified by the ladder seen by Jacob in the dream, which stood upon the earth, whose top reached to heaven, and on which the angels of God ascended and descended, and above which stood Jehovah or the Lord... by conceiving and bearing, four times mentioned, is signified advancement from external to internal, or from truth to good, that is, from earth to heaven... Descent follows afterward, for man cannot descend unless he has first ascended. Descent is nothing else than looking at truth from good, as a man from a mountain, upon which he has climbed, views the things which lie beneath. That then he can comprehend in one view innumerable things more than they who stand beneath or in the valley, is manifest to every one. The case is exactly similar with those who are in good, that is, in love to the Lord and in charity toward the neighbor, compared with those who are only in truth, that is, in faith alone." (Heavenly Arcana, n. 3882.1-2)

Note that I have not said which truth by one ascends toward the Divine.  That is because love in its nature is one, and many are the truths which lead to it. Religion by itself does not save a person, but only a life according to one's religion. Thus those who know nothing of a religion, and yet live a good life according to their conscience and the truth that they know, have a better capacity of reaching eternal life with the Divine than those who know and yet do not practice it:


"Good indeed in its essence is simply one, but it receives its quality from the truths implanted in it, and thereby becomes various. The truths which appear as truths to the Gentiles, are in general that they should worship some God, from whom they seek their good, and to whom they attribute it, and so long as they live in the world, they do not know that this God is the Lord; also that they should adore their God under images, which they account holy; besides many other things. Nevertheless, these things are no hindrance to their being saved equally with Christians, provided they live in love to their God, and in love toward the neighbor; for thus they have the faculty of receiving interior truths in the other life" (Heavenly Arcana, n. 3778)

For God, in his true essence, is Love itself, and those who practice love towards other are not only happy in this life, but will be happy for eternity.  When one understands and then does this, one then reaches the top of the mountain.

Email ThisBlogThis!Share to TwitterShare to FacebookShare to Pinterest
Labels: Lord of the Rings, Love, Purpose in Life, Swedenborg