After years of research, the first half of my findings into the prophecies of Nostradamus has finally been published in the book The Decoded Prophecies of Nostradamus.  This is no ordinary book on Nostradamus: not only are the prophecies discussed in detail, but I have cracked the numerical code that Nostradamus used in his prophecies.  I had presented some of this research back in the early 90s, and a result of that I appeared as a guest on the CBS documentary Mysteries of the Ancient World.  Here is the book cover: 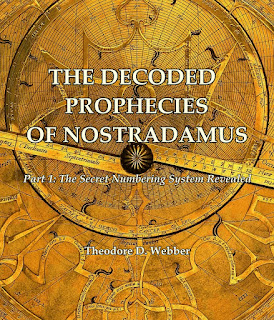 This took a lot of effort - I started on this 25 years ago.  It is available now on Amazon, and soon on Barnes & Noble.  I could have been blogging on this, but the research would have been too complicated to present in a blog and would have taken much longer.  During that time, I have seen a lot of substandard books published on his prophecies, which are typically not backed up by factual information.  Lately the books I have seen have taken a skeptical slant, based on the latest documentary evidence that has come from researchers in France.  Even as I was writing the book, I discovered a few surprises myself...even when I look back and read it, some of it is a bit strange even to me.  I try to go beyond the prophecies to come up with a rational explanation, but to come up with an explanation requires a shift in one's view: one that is no longer naturalistic or materialistic, but spiritual, supernatural, and paranormal.  There is MUCH more to reality than the eye can see, and this book presents strong evidence for a spiritual world beyond this one, which is constantly interacting with this one.

This was over 400 pages...I still am not done.  There will be a second volume coming.  As it is 2012, there is a lot out there discussing the end of the Mayan calendar.  Few people know what the New Age even means.  For me, it is a new era of spiritual freedom, free from religious authority, free from false religious concepts.  For the New Age to begin, we first have to expose those false religious principles, so that people can see the light.  This is a part of that effort.

Some of it I was not sure about, I decided to censor some information which I may release in the second volume.  Lets see how it plays out in the public now.

The link on Amazon is here: DECODED PROPHECIES OF NOSTRADAMUS

Here is a more full description:


Nostradamaus was an astrologer and apothecary during the 16th century, who fought against the Bubonic plague and became a trusted advisor to Queen Catherine de Medici of France.  He left behind a series of prophecies arranged in a thousand quatrains, written in an obscure and symbolic style using a combination of French and Latin. Due to the wars of religion between Catholics and Protestants of the time, he took great care to hide certain information in the prophecies. Over the span of five centuries, many commentaries have been published which have noted some remarkable fulfillments of these prophecies, which foretold major turning points in history such as the English Civil War, the events of the French Revolution, World War II, the rise of America as a super-power, and a future empire from the East which is yet to come.  For the first time, this book reveals that Nostradamus made use of a numeric coding system which he used to mix the prophecies out of order like a gigantic jig-saw puzzle.  Evidence is provided for this numeric coding system, and although hard to see at first it is explained in a simple manner for any reader to verify.  Throughout the book, the prophecies are then decoded one by one, to show that the decoding system works across the majority of the prophecies and not just a select few. Some older interpretations of the prophecies are verified using this system, others are debunked, and in several cases a new interpretation that was never known before is revealed.  Unlike all other books of Nostradamus, this book not only focuses on providing an accurate interpretation of the prophecies but shows that for the first time they can be systematically decoded.  Well researched with objective facts, the book provides a comprehensive overall picture of the prophecies.  Nostradamus himself had predicted that much of what he had written would become more clear 500 years after his time.

In addition to revealing the decoding system for the prophecies of Nostradamus, the book includes a comprehensive biography of the life of Nostradamus based on the latest research from historical scholars.  Certain events in the life of Nostradamus are revealed in more detail based on the historical evidence.  Moreover, the book goes behind the scenes to discover direct influences on Nostradamus which includes not only his Catholic faith, but also astrology, the Jewish Qabalah, mysticism, and Neoplatonic philosophy. Also discussed is the probably source of the inspiration of his prophecies. Countering skeptics and naturalistic philosophy, the book explores the direct influence of the spiritual world on events that take place in the natural material world, and explains how dreams and visions may reveal events of the future.  Nostradamus did make use of astrology in his yearly almanacs, but that was generally not the source of his inspiration.  However astronomical configurations were sometimes used to provide exact dates for some future events. Although Nostradamus hid much of this and wrote obscurely, the phenomenon of seeing the future through dreams and visions is explained in detail in the visionary experiences of Emanuel Swedenborg, an 18th century scientist turned theologian.  Readers will be introduced to a comprehensive spiritual philosophy that explains the existence of prophecy.  An explanation is provided for the spiritual meaning of the "end of the world" and the beginning of a new age. The astronomical configuration of 2012 is briefly discussed to provide an alternative view that few people have considered. Going beyond prophecy, the book will challenge people to re-evaluate certain beliefs - or skepticism - concerning their own religion.

Based on years of research, the original manuscripts were used and a computer program was used to ensure a consistent and accurate translation. As many publications of the prophecies of Nostradamus contain numerous mistranslations and misinterpretations, footnotes are provided to document the original words and their meaning. Both the original text and the translation are presented in this work. For interpreting the actual quatrains, hundreds of historical references were consulted and are documented in the extensive bibliography.  The end result is to provide the most accurate and objective interpretation as possible, considering the obscure symbolic style of Nostradamus. Unlike the majority of books on Nostradamus, this book does not merely rehash previous research. Instead a unique reassessment and solution is provided for the prophecies of Nostradamus, which has been a 500 year mystery. Given the amount of information required to interpret each individual quatrain, this book represents the first half of the results of the research. This work provides strong foundational evidence for anyone interested in prophecy, dreams, spirituality and angelic inspiration.
Posted by Doug Webber at 8:47 PM