The Universal Philosophy of Good and Truth 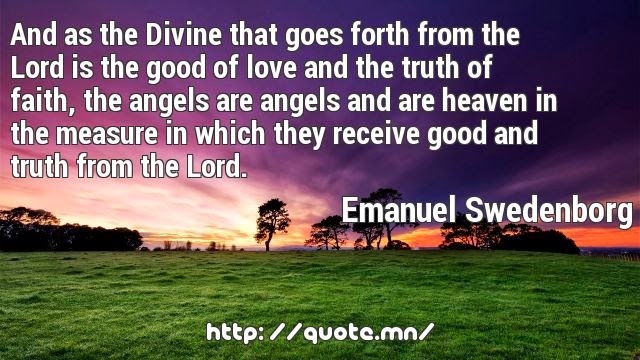 The primary principle of the New Church is that everything in the universe is related to two principles: Good and Truth. There is no truth without its corresponding good, and there is no good without its corresponding truth. Good and truth become one in usefulness and service, this is a spiritual marriage. Each person is an image of Good and Truth in that each person has a will and an intellect. More accurately, each person is an image of God inasmuch as one does good by the truth that one knows. It is a universal principle: we can see it in atoms composed of the nucleus (substance) and electrons (form), all the way up to the human form, composed of male and female. The male tends toward the intellectual, the female tends toward the volitional, and together they complement each other and make one by way of marriage.

Religions, which emphasize faith alone, or belief only, or eastern philosophies which speak of meditation or enlightenment only, are not complete. One must address one's will, not just what one knows. It requires self introspection, an ability to acknowledge one's faults. Otherwise one's religion or philosophy is hypocritical. For truth without good, or truth divorced from good, becomes nothing:

Whether or not an act is good or evil, is dependent upon one's intent. One's intent or purpose is the will, the means by which one does one's will is the thought, the two become one in the outward act. This is also known as end, cause and effect. While science acknowledges cause and effect, it does not acknowledge intent or purpose, or end. The philosophy of Utilitarianism fails in that it does not acknowledge the intention of the act in valuing usefulness. One should not be deceived by external appearances, or seek to deceive others by external appearance. All outward actions are judged by intent: this is not only true in a court of law, it is also true in the afterlife:


"Angels do not attend to any other than internal things, that is, to ends, or to intentions and purposes, and to thoughts therefrom." (Heavenly Arcana, n. 3489)

I mention intent, as many have the habit of putting up a false external appearance. But appearances count for nothing in the other life. Intentions are important. It is also important to note, that good deeds for the sake of one's own self honor, or for self gain, are not good. If the intention however is to fulfill a good use, without regard to self, then the act is regarded as good.


CATEGORIES OF GOOD AND TRUTH, AND THEIR OPPOSITES

This insight, that everything has relation to good and truth, pervades all of the revelations given to Emanuel Swedenborg in the 18th century.  In one of his earlier works, The Doctrines of the New Jerusalem, he begins with this principle that everything that exists is related to good and truth. From this simple principle, all doctrines of the New Church can be derived, and it is easy to apply them to one's life. For example:

Whereas people put on the same external appearance, internally each person is different, according to how their personality and life corresponds to good and truth. So lets start with category (A) above.:


"...there are two kinds of falsity, namely, the falsity which is from evil, and the falsity which produces evil. The falsity which is from evil is all that a man thinks when he is in evil, namely, all that favors his evil; as for example, when he is in adultery, what he then thinks about adultery, that it is allowable, that it is becoming, that it is the enjoyment of life, that the procreation of offspring is thereby promoted, and the like. All these thoughts are falsities from evil.
"But the falsity which produces evil is when a man takes up some principle from his religion, and believes therefrom that it is good and holy, when yet it is in itself evil. For example, he who believes from his religion that there is some man who can save, and therefore worships and adores him, does evil from that falsity; and so it is to act from any other religion which in itself is false." (Heavenly Arcana, n. 2243)

See the distinction? The falsities produced from evil are the justifications people make to favor the sinful action they commit. Someone who commits a wrong and lies about it to cover it up. False gossip to put someone down in favor of your self. However there is falsity which produces evil: this occurs when people accept a falsehood as truth, and begin to act upon that falsehood. Examples of this are cult brainwashing, media propaganda, false religions, and false advertising. These are falsehoods that seek to produce some sort of evil. Thus the propaganda from media exerts a strong influence on what a society accepts as good or evil.

So what about category (B): those who are in truths but without any good. These are those who know the truth but do not do them. People who say they are religious but do not apply it to their lives. Those who think one just has to believe in order to achieve salvation. People who think they are better than others because they are intelligent. This category of people is different: since the truth is not conjoined with any good, the truths that they know tend to become dissipated and fall by the wayside, as they are not applied to life. Truth is only living from one's affection for what is good. However, one can take this and understand one's own spiritual progression, which occurs in 4 stages (see Heavenly Arcana, 3603.3):


1. One learns the truth, but is content only with applying it to others. Truth at this point is just knowledge contained in the memory. This represents category (B), above.
2. One investigates the truth on one's own, instead of accepting it on authority. This again represents category (B).
3. In the third stage, one now thinks about how the truth that one knows can be applied to use, that is, to one's life, and starts doing from what one knows. This is category (C), above.
4. In the fourth stage and final stage, there is an inversion of truth and good: whereas good was secondary, good now becomes primary. From the good that one does in one's life, one knows what is true - this is category (D), above. The best word to describe this stage is "wisdom," which is different from knowledge (category B) or intelligence (category C).

Most people are at the first stage, including those who consider themselves religious. Very few reach the fourth stage. The process of spiritual progression includes a period of temptation, for if one accepted a falsehood as truth and lives by it, it can take time to remove that falsehood, and false teaching can hold someone back from progressing further. All our actions are guided by our thoughts, and thoughts will fall into things that are true, or things that are false. Action and thought, again, are a manifestation of good and truth, which act as one.


APPLICATION TOWARDS ALL RELIGION AND PHILOSOPHY

This is a universal philosophy, and once one understands these simple principles of good and truth, one can use it and apply it to any religion, theology, philosophy, school of thought, or way of life.  It becomes easier to recognize one's own spiritual maturity in life, and it is easy to assess different systems of thought. It is universal. It is simple. It is so simple, yet insight after insight can be gathered from it. I have only scratched the surface of this teaching.

So the question one may ask, where is God in any of this teaching? That is the beauty of it: GOD is what is GOOD, God is what is TRUTH.  "Good" and "truth" are not just abstractions: they are God himself, which flows into every human being through our conscience and our thoughts. These principles of good and truth pervade all that lives, for God is life itself. These simple principles can be applied to everything that you know about life. Emanuel Swedenborg applied it in such a way that he could open up the hidden spiritual sense of scripture: for everything in scripture is about nothing but these principles of good and truth, and there are distinct Hebrew words used for each.

Inasmuch as one is in good and truth, so far one can consider oneself to be truly human, and together all of humanity becomes part of the one Divine God Man:

Email ThisBlogThis!Share to TwitterShare to FacebookShare to Pinterest
Labels: Swedenborg