A Prophetic Dream of Flight MH17: Another False Flag? 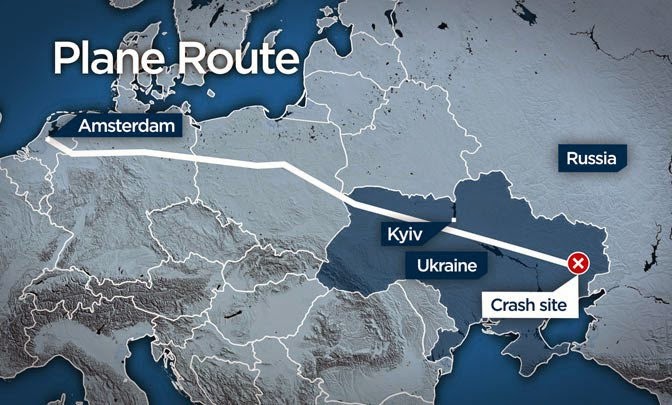 UPDATE (10/21/14): There have been false media reports concerning the flight path of flight MH17. Flight MH17, unlike previous flights flew over the warzone. Ukraine has yet to release the flight controller records (this was not known when I originally posted this):

On July 17, 2014, Malaysian flight MH17 crashed in eastern Ukraine killing all 298 people on board, in separatist Russian held territory. And the media is all over it, blaming it on pro-Russian separatists. It is said that it was shot down by a surface to air missile.  As the flight was at 33,000 ft, the Pentagon states that it was probably an SA-11 surface to air missile, a system that was perhaps supplied to pro-Russian separatists by Russia.  According to Malaysian Airlines Flight MH17 crash: What we know:


The Pentagon said Friday it is unlikely that pro-Russian separatists in east Ukraine could obtain or operate the sophisticated missile system allegedly used to shoot down the Malaysia Airlines plane without Russian help.
The Pentagon says there is strong evidence the missile, a SA-11, was fired by Russian-backed separatists since the missile was fired from an area controlled by rebels.
But Ukraine said something different: it was shot down by another aircraft:


The Obama administration said preliminary evidence suggests the cargo aircraft was hit by a surface-to-air missile. Ukraine's government says the jetliner was shot down by a Russian aircraft.

Coincidentally (or not), this crash occurred on the anniversary of the crash of TWA flight 800 on July 17, 1996.  According to the official investigation, the cause of the crash was probably caused by the explosion of flammable airs in a fuel tank.  However, there is strong evidence that this flight was accidentally shot down by a U.S. missile, and was the subject of a government cover up. See TWA Flight 800: What Really Happened. You cannot trust what the media feeds you. Always check the facts for propaganda.

As for the dead, another interesting fact emerges. From The crash of Malaysia Airlines Flight MH17 in Ukraine: a timeline


More than half of the passengers - 189 - are of Dutch nationality, while around 100 of those who die are delegates en route to Melbourne, via Kuala Lumpur, for the 20th International AIDS Conference, which is due to begin on Sunday.

Other reports reduce the number - up to now 7 confirmed. But among them was Joep Lange, the former president of the International Aids Society and a notable HIV researcher. He founded "PharmAccess Foundation", a non-profit organisation based in Amsterdam which aims to improve access to HIV/AIDS therapy in developing countries. The interesting thing is it looks like his research found evidence of stopping AIDs, which for some reason, was derailed by other "activist" organizations. From Wikipedia:

In 2003, Lange completed a study on the offspring of HIV-positive volunteer mothers in Rwanda and Uganda. He found that a baby's chance of contracting HIV falls to less than 1% if they receive anti-retroviral drugs while being nursed. The findings of the study were announced by Lange at the 2003 International AIDS Society meeting in Paris. During the 10th Conference on Retroviruses and Opportunistic Infections in Boston, Lange announced the results of a large multicenter clinical trial with the involvement of 1,216 patients in 17 countries. According to Lange, who served as principal investigator, these findings "clearly demonstrate the comparable efficacy of nevirapine and efavirenz in HIV treatment".
Two years later, he commented in an editorial for PLOS Medicine that activist groups have derailed several pre-exposure prophylaxis (PREP) clinical trials. He also expressed frustration that activist groups have prevented newer CCR5 receptor antagonists from being tested in Europe. However, Lange was criticised for neglecting the needs of sex workers in the trials, and other researchers asserted that the concerns raised by activists are "entirely legitimate".

In a previous blog post from April of this year, CIA Blowback in Ukraine, I mentioned that there is strong evidence that pro-Maidan (pro-Western) organizers were responsible for the snipers who had killed people during the February 2014 protests, which led to the overthrow of President Viktor Yanukovych who had just agreed to an economic deal with Russia. He of course has been replaced by a pro-Western president who had signed a deal with the EU.  Following that post an interesting news item emerged: White House confirms CIA director was in Kiev. I noted that in a follow up comment, and said "this is not looking good."  So what is the head of the CIA, John Brennan, doing in Ukraine? Can they be more obvious than that? The media of course, did not discuss the story in detail. For those of you who want more facts concerning this western backed coup, see Poland’s Hand in Ukraine Coup d’Etat: Trained Putchists Two Months in Advance, on Behalf of US-NATO.

So what is going on here? Why the back and forth between the U.S. and Russia over Ukraine - a territory, that is in fact an artificial country, and historically belongs to Russia?  Why was the U.S. so upset when Crimea - VOTED - to become part of Russia?  The answer is oil and gas pipelines.  The fact of the matter is, oil supplies are dwindling. From the Guardian (I always have to go outside the U.S. for some news), Ukraine crisis is about Great Power oil, gas pipeline rivalry:


Resource scarcity, competition to dominate Eurasian energy corridors, are behind Russian militarism and US interference

And unfortunately for the west, these pro-Russian separatists in eastern Ukraine are messing up their plans. So the crash of flight MH17 over their territory is rather convenient. Actually quite fortuitous.  What a coincidence. What a perfect story to turn public opinion and Europe to do something about these pro-Russian separatists in eastern Ukraine.


A PROPHETIC DREAM CONCERNING THE SHOOT DOWN OF FLIGHT MH17

The above is enough to make me suspicious of what the media is feeding the public. So I would encourage people to follow the facts, and to question the source of such facts. But there is something else that makes me question what western media is saying. As said before in this blog, I know of some people who have a tendency to have prophetic or clairvoyant dreams. And just a few weeks ago, a friend of mine told me of a dream in which they saw a plane overhead, and it was carrying a globe full of money.  They saw me take a rock, and I hit that pearl or globe, and it cracked open, showering the surrounding area with money. It was a dream of a deliberate shoot-down, not accidental.  And the shoot down was done for money. The person who has these dreams is highly accurate, I have seen it happen over and over again. For a similar dream, see A Precognitive Dream of September 11.

Due to how recent this event is, I have left certain details out. But one thing that is interesting is that this shoot down comes close to my birthday, and I am half Dutch.  Most of the victims were Dutch or from the Netherlands. This leads me to believe that the dream does concern flight MH17, and there were other details in the dream that indicated it was going to happen this summer.

So again, I encourage everyone to follow the facts, and do not trust what the media is telling you. The U.S. will promote doing something about the situation in Ukraine. Conspiracy theory? Has everyone forgotten the false flag of the Gulf of Tonkin incident, to get the U.S. involved in a war in Vietnam? The U.S. will of course say nothing concerning the attack of Israel on Gaza, where about the same number of people have died in a military operation against a civilian population. That of course, is deliberate use of military power against unarmed civilians, not accidental.