CIA Blowback in Ukraine, and Love your Neighbor

Blowback - its a term for how subversive policy measures "blowback" and come to haunt us later. Or, as we commonly say, "what goes around comes around." Or, as Jesus said, He who uses the sword shall die by the sword. While most Americans consider the U.S.A. as a democracy (technically its a republic) supporting democracy across the world, that is not always the case in our foreign policy.  The CIA plays an active role in subversive activities to overthrow governments, or encouraging revolutions from within. But this plants the seed for giving birth to a monster that comes to haunt us later. So why do we now have a problem with Iran? We overthrew their democratic government in 1953. And under the Shah, we encouraged Iran to develop nuclear power for peaceful purposes. And after the Iranian Revolution, we supported Saddam Hussein to engage in a bloody war during the 80s. We supported the Taliban in Afghanistan against the Soviet Union, and back then Osama bin Laden was a CIA asset - and the Bush family has had close ties with the bin Laden family (see THE GW BUSH - OSAMA BIN LADEN CONNECTION). This is not a "conspiracy theory." It is U.S. history, the history they will not teach you in school. See the following video clip, with former interviews from CIA agents, including Chalmers Johnson:


(7:46) When the American public doesn't know about secret American foreign policy, it asks the question: "Why do they hate us?". In 2007, Ron Paul used the term "blowback" and claimed it was US foreign policy that created the hostility that eventually led to 9/11. Not what an American politician is supposed to say. 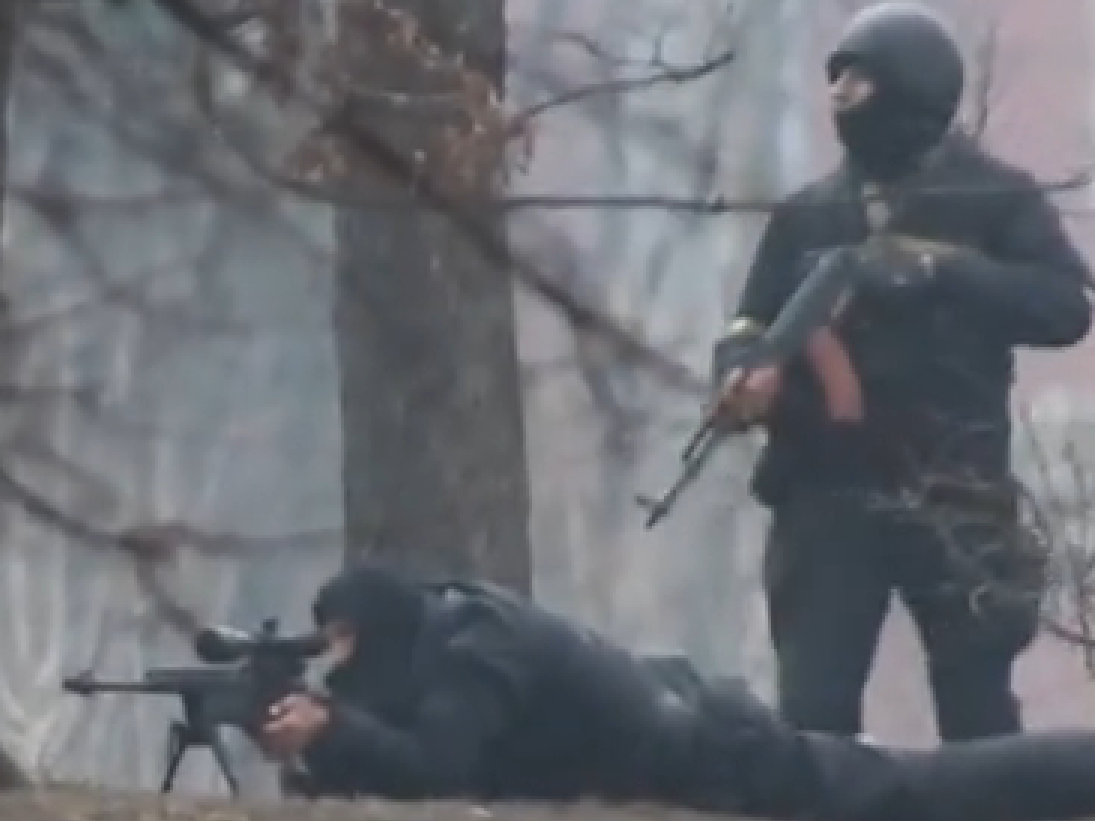 You would think people would learn from history but old ways die hard. It is the oldest trick in the book: to weaken your "enemy", divide from within. Such a technique is described by Sun Tzu in the Art of War.  Ukraine and Kiev play a large role in Russian history, with many ethnic Russians, but the west has been pushing for Ukraine to become a part of NATO. These efforts have not led to more stability, but more tension which has recently flared up. There have been efforts to divide people on the basis of language and culture, when in fact, we are one people. In the revolution in Ukraine in February, people took to protest against President Viktor Yanukovych, who shied away from an agreement to closer alignment with the EU and began to establish closer ties with Russia. Protests began in November, but in the protests of February mysterious snipers showed up and began shooting at protestors AND police officers. There is a current investigation as to who was behind it. But if you are going to have snipers shoot at both sides, the goal is clear: incite more violence on both sides. Some say Yanukovych was behind it, others say the current Maidan leaders were behind it. Its hard to hide this because of a leaked phone call. From Estonian Foreign Ministry confirms authenticity of leaked phone call discussing how Kiev snipers who shot protesters were possibly hired by Ukraine's new leaders


Estonia has confirmed the authenticity of a leaked telephone call between its foreign minister and an EU chief which suggested the sniper killings in Ukraine last month were ordered by the new coalition. The 11-minute call between the EU's foreign affairs chief Catherine Ashton and her Estonian counterpart Urmas Paet was made on February 25 in the aftermath of the massacre. During the call, Paet claims a doctor told him both protesters and police were shot by snipers during clashes in Kiev allegedly on the orders of the opposition. But while the Baltic state acknowledged the audio was genuine, it denied that it had blamed opponents of Ukraine's deposed president for sniper killings during last month's unrest.

Ordering sniper fire on both sides, inciting more violence, causing Yanukovych to flee the country, and now blaming Yanukovych, defies all logic. Who benefits? Possibly those who wished to see Yanukovych go to cancel the agreement with Russia. The recent news blames Yanukovych: see Ukraine Security Chiefs: Maidan Snipers Were Under Yanukovich's 'Direct Leadership'. But the former head of Ukrainian security says the exact opposite. From Who were the Maidan snipers?:


Oleksandr Yakymenko, the former head of Ukraine's Security Service, claimed this week in an interview with TV channel Rossiya that pro-Maidan (pro-Western) organizers were the ones behind the Feb. 20 shootings.
Yakymenko said the shots came from Kyiv's Philharmonic Hall. That particular building was overseen by the Fatherland Party's deputy Andriy Parubiy, known unofficially as the "commander of Maidan." After President Viktor Yanukovych fled Ukraine, Parubiy assumed the post of Secretary of the National Security and Defense Council for the interim Ukrainian government. ...Yakymenko went on to claim that among the snipers were foreign mercenaries. While not making a direct connection between the United States and the snipers, Yakymenko suggested that the US embassy was somehow using Poland to orchestrate the overthrow of (now ousted) Yanukovych.

So, is it any wonder that Russia reacted by sending in unmarked soldiers to take control over Crimea? This is what I call "blowback."


EVERY EVIL CONTAINS WITHIN IT ITS OWN PUNISHMENT

It is a law of order that every evil contains within it its own punishment. There is no circumvention of this law of order. God does not punish us, we punish ourselves. For laws of order are created to turn us back to what is good. And this is not just some philosophical statement, it is a law of order in how the unseen spiritual world interacts with the natural material world. Swedenborg observed this in his visions of the spiritual world:

The description of how this affects things in the natural world can be found in Angelic Wisdom concerning Divine Providence. For it is better to be punished here, to reform oneself here, rather than wait until the afterlife. And, while every evil contains its own punishment, every good contains its own reward. I was reading the media's drumbeats for war in Russia's Plans to Partition Ukraine, and through all the noise I saw one interesting comment on the news article:


Having been a Peace Corps Volunteer in Ukraine, living in a pretty nationalistic community in western Ukraine, this particular crisis has hit pretty close to home. Regardless of the self-determination issue (though I completely agree that Russians generally don't recognize Ukrainians as having a truly unique identity), my broader concern is for improving the well-being of all Ukrainians. The country is very poor, far poorer than most in the West realize, and it has pained me to see how little economic engagement the EU and US have shown Ukraine since independence. Had their been more engagement and more economic success, I think the divisions between east and west in Ukraine would have been less stark. A lot of eastern Ukrainians, though they speak Russian, area actually more attracted to closer ties with Russia because of its perceived gas-fueled stability, not for cultural reasons. ...My greatest fear is that the West perceives this conflict as part of a broader game, that it trades what's best for Ukrainians to get cooperation on North Korea or Syria or some other issue.

So instead of sending in money to improve the poverty level for everyday people of Ukraine, the focus is on gaining more control, more power, more influence.

THE STORY OF THE ZEN MASTER AND THE LITTLE BOY

To see how things work "behind the scenes" in politics, one of my favorite movies is Charlie Wilson's War. The CIA agent is played by Philip Seymour Hoffman, who sadly died of a drug overdose about 2 months ago. If he had any last words to say on this, it would probably be the story of the Zen Master and the Little Boy: